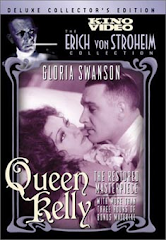 In Stephen Michael Shearer’s book Gloria Swanson, an entire chapter is devoted to Swanson’s unfinished film Queen Kelly. The chapter itself is fascinating, but one particular part came to mind as I watched the film. In one of the film’s most important scenes – the first meeting between the handsome and playful Prince Wolfram (Walter Bryon) and the spunky commoner Patricia “Kitty” Kelly (Swanson) – the film’s director, Erich von Stroheim, made an unusual request of Bryon. In the scene, the Prince is leading his platoon on a routine exercise when they pass a procession of young ladies from a local convent. One in particular catches his eye. On any other occasion, he would probably put on the charm and delight in making the young lady blush and smile, but on this day, he notices that the young lady’s underwear has fallen down, and he is overcome by a serious case of the giggles. After expressing a gamut of emotions, Kelly settles on anger and hurls the exposed garments at the unsuspecting prince. In the take referenced in Shearer’s book, the prince brought them to his face and smelled them. Needless to say, that did not make the final cut.

And yet, the action would have been more in keeping with a character like Wolfram. Wolfram is a playboy trapped in what looks to be an arranged engagement with a brutally oppressive queen that he has no feeling for whatsoever. More to the point, he’s someone whose idea of a romantic reunion involves starting a potentially deadly fire, using chloroform as a substitute for sweet serenades, and making sure that the woman he has supposedly fallen for has nothing to wear but her nighties. At the very least, these actions hint at a rather perverse idea of courtship. Now imagine the impression that would have been made had he actually put the lady’s undergarments to his nose and become instantly intoxicated.

Alas, that is not the film that either Swanson, who financed the picture as part of her deal with United Artists, or Stroheim had in mind. For his part, Stroheim envisioned a five-hour epic, one that followed Kelly’s journey from naïve youngster to jaded adult, and it would have ended with Kelly perplexingly assuming the throne. However, Swanson, according the film’s Wikipedia page, felt misled by Stroheim’s script and was uncomfortable with the parts of the film set in the Tanzanian city Dar es Salaam. The rift was apparently unresolvable, and Stroheim was fired. It would be the last directing job he ever received.

And so, unable to complete his vision, we are left with an unwise courtship, a violent punishment, and a tragic decision that reflects the reality of the social norms at the time of the film’s release. From there, we get fragments: stills of a letter announcing a sick relative and a long journey by sea, followed by scenes in which Kelly finds herself in the same position as her royal amour. From there, we get references to Stroheim’s script and the complete turnaround that would have occurred in Kelly’s character, and it is perfectly clear that Stroheim intended for the film to be an epic

Fortunately, there’s a lot to admire about Stroheim’s efforts here. First, the character of Patricia Kelly is an interesting one, and Stroheim elicits some amazing emotional moments from Swanson, ones in which she is asked to display a range of conflicting emotions. We can see each one and recognize their progression. In one scene, she perfectly conveys the dread and shock of a woman who has incurred the wrath of a jealous and violent queen. The result is a tough scene to watch. Stroheim also gets a terrific performance from Bryon. Playing the cad, the naturally alluring Bryon infuses the character with charm and wit, making it perfectly sensible that women would keep picture postcards of him under their pillows. Matching them is the indelible Seena Owen, who plays Queen Regina V. She makes it perfectly understandable that Wolfram would not be able simply to walk away from the engagement, and her facial expressions are the stuff of nightmares.

Ultimately, Swanson’s instincts were correct: Under Stroheim’s direction, the film veers into questionable territory, and not simply because what develops seems superfluous to the main plot. The first hour depicts an unwise and unresolved courtship. Conventional wisdom says to stick with that story line, yet under Stroheim’s direction, Kelly was to have been married off to Jan Vryheid (hammily-played by Tully Marshall), one of the most overtly lecherous characters ever to grace the silver screen. Just what Kelly’s aunt sees in him that makes her think he would be a suitable husband is anyone’s guess. And that would not have been the end of Kelly’s misery.

It would also not have provided an adequate resolution to the film’s love story, for Kelly and Wolfram have known each other for just two days, and few of their conversations are the kind from which he could realistically conclude that he’d found his soul mate. In an attempt to salvage the film, Swanson filmed a brief ending, and to her credit, it more than adequately completes Kelly and Wolfram’s story. This was the ending audiences in Europe and South America saw when the film was finally released in 1932. It would be more than twenty years before audiences in the United States were afforded the same opportunity.

To watch it today is to see a divided film. It is clear that Swanson wanted a Shakespearean love story, while Stroheim wanted a much more perverse and fractured fairy tale. The differing visions ultimately hurt the project. While the personalities of Kelly and the Queen remain consistent, Wolfram’s is all over the place. Does he love Kelly? Certainly not at first, and believing that he suddenly does requires a certain degree of amnesia on the audience’s part. Still, we feel for Kelly, and we grow to want a better life for the Prince. So, it works. It just needed another thirty minutes to develop their relationship more fully and for the film to end without the African journey. Swanson got that. (on DVD from Kino)

3 stars (Stroheim’s version)
3 and a half stars (Swanson’s version)
Posted by Azrael Bigler at 7:42 PM