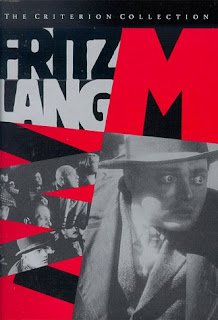 Fritz Lang’s 1931 film M does not follow the standard formula. The film begins by focusing on a woman at home washing clothes. On her stove is cooking her daughter’s lunch. As children get out of school, she waits patiently. Children living upstairs from her arrive, but not her daughter. An hour passes but still no daughter. The daughter has become another victim of a child killer. The audience has seen this coming. In an eerie scene, the child is seen bouncing a ball of a pole, on which is posted a news report on the killer warning people to be on the lookout. A voice is then heard saying, “What a beautiful ball.”

From there, the film becomes concerned with two investigations, one by the police and the other by local gangsters who complain that the killer is disrupting their business. Both set up plans to find the killer, the police relying on arrests and expanded searches, the gangster’s relying on the beggar’s union to be their eyes and ears throughout the city. Both investigations are successful, and as they begin to show results, the killer is revealed. It is about forty-five minutes into the film that the audience sees the face of the killer.

The film has many interesting and memorable moments. I particularly liked the way the movie shows the fear, paranoia, and distrust that goes through the town, causing neighbors to report the suspicious behavior of perfectly innocent people and distrust anyone seen talking to a child that is not his. Also, the scene in which the killer is discovered and trailed throughout the city is thrilling and extremely well filmed.

The film has been released twice by The Criterion Collection. I watched the film on Criterion’s original release. That release has white subtitles, and there are a few moments when they are difficult to read. The disc also contains no special features. Criterion released a two-disc edition of M a while back, and from what I hear, it is an improvement.