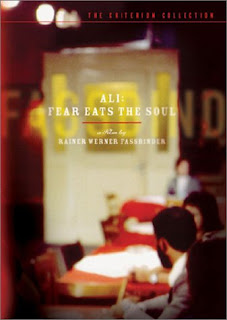 Douglas Sirk’s All That Heaven Allows told the story about a romance between an older widow and her much younger boyfriend. Years later, the film became the inspiration for German filmmaker Rainer Werner Fassbinder’s Ali: Fear Eats the Soul. In Fassbinder’s film, Emmi, an older widowed German woman, meets and falls in love with Ali, a Moroccan worker in Germany who is at least 20 years Emmi’s junior. The movie then spins a fascinating tale of love, racism, and fear.

Emmi grew up in Nazi Germany and as the film makes clear, racist feelings about foreigners did not disappear just because that war ended. Emmi meets Ali when she steps into a bar to get out of the rain. The bar is frequented by Arabs, and because Emmi is not Arab, all eyes stare at her. A woman suggests Ali ask Emmi to dance, and he obliges. He finds, much to his surprise, that he and Emmi have a great deal in common, and they begin a friendship that leads to a romance and a marriage.

Along the way, they face challenges at every corner. Emmi’s neighbors gossip and treat her differently, and her coworkers through out racist rants about how dirty and obsessed with sex Arabs are. The film then cuts to the apartment of Krista, Emmi’s daughter, and her husband Eugene, who is everything Emmi’s coworkers stereotype Arabs as being: lazy, disrespectful to his wife, and drinking too much. He even calls his wife a “slut.”

Emmi and Ali get married with little fanfare at city hall. They celebrate at one of Hitler’s favorite restaurants, where a waiter stares at them a little too long. Emmi and Ali announce their marriage to Emmi’s children a week later. None of them smiles or offers congratulations. Instead, one son kicks and shatters the television in anger, Emmi’s daughter calls her mother’s house a pigsty, and the other son informs her that her family has now disowned her. They are not the only one’s to do so. As the film progresses, Emmi’s friends, co-workers, and acquaintances all abandon her, spouting racist ideas as they do. Emmi and Ali decide to take a vacation, hoping that when they come back, things will miraculously have returned to normal. If only life were that simple.

Films like this risk going over-the-top, of showing so many people being racist as to loses credibility. That is not true of this film. Ali: Fear Eats the Soul is a tough and emotional experience, but one that demands to be seen.

Ali: Fear Eats the Soul was released on DVD by the Criterion Collection. It is in German with English subtitles.
Posted by Azrael Bigler at 5:19 AM

hello..
I'm hard to read because of vocabulary. I'll learn that.^^

You do that, Mulan.