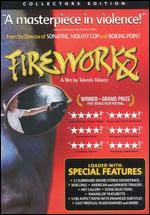 Nishi is a man of few words. Perhaps there are no words to describe how he feels, having lost a son already and losing a wife slowly to leukemia. Adding to his miseries is the memory of seeing two of his fellow police officers shot in front of him after he failed to subdue a suspect, as well as the recent shooting of his long-time partner Horibe, who is now confined to a wheelchair. Nishi is prone to attacks of violence that are simultaneously humorous and terrifying.

Nishi is, however, a broken man, weakened in power by his retirement, undermined in influence because of his financial difficulties, and completely incapable of saving his dying wife. His wife’s doctor advises him to take his wife on a trip and help her relax, but in order to do so, he must have money, and he is already in debt with the Yakuza, perhaps because of his wife’s hospital bills. His remedy for this simultaneously shows how low he has sunk and how determined he is.

It could be said that Fireworks is two movies. The first half is about Nishi and the multiple worlds that he inhabits as policeman, husband, friend, and borrower; the second focuses more on his role as a husband. His trip with his wife is peaceful but eerily quiet. In addition, it is not romantic. At one point, Nishi’s wife takes his arm as they are going to take a picture, but the move startles Nishi, and he pulls his arm away suddenly, removing his wife’s smile while simultaneously physically distancing them. In another scene, Nishi’s wife has her picture taken by a professional photographer; her husband just watches from a distance. However, distance cannot change fate, and fate is chasing him in the form of police, gangsters, and death. The further he goes from the city, the more the audience realizes he can never go back, and perhaps he never intends to.

Fireworks is a subtle, quiet film, and people expecting a film like Boiling Point may be put off by its slow pace, but those willing to stick it out will not be sorry that they did.

Fireworks was written and directed by Kitano "Beat" Takeshi, who also wrote and directed A Scene at the Sea and 2003's The Blind Swordsman: Zatoichi.

Firworks was released on DVD in the United States by New Yorker Films and has English subtitles.
Posted by Azrael Bigler at 12:00 AM