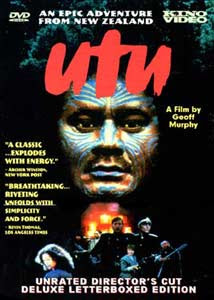 The line between a hero and a villain is often a blurry one. The era of colonialism was filled with atrocities, for the justification for colonialism was often the belief that one race was superior to another and that it was the duty of one to “civilize” the other. During this era, folk heroes were rarely from the colonialist side; however, the actions of a revolutionary can sometimes be equally as brutal as those of the the oppressor he is rising up against. It is this complication that makes Geoff Murphy’s Utu simultaneously fascinating and frustrating.

Utu begins with a massacre. British troops raid and devastate a Maori village. They shoot anything that moves, including the young and the elderly. Te Wheke, a Maori corporal in the British army, comes across this village, which happens to have been his family’s home, and vows utu, the Maori word for revenge. Killing one British soldier, he lets another go free, telling him to deliver a message to the head of the British soldiers in New Zealand, Elliot. The message could not be clearer: Te Wheke is coming for him.

At this point, Te Wheke is certainly justified in seeking revenge. It’s hard to still see him that way for long. The first act of revenge that the audience sees is him attacking a priest preparing to take confession and a priest giving a sermon - ironically on how those who live by the sword will die by the sword. The sermon is filled with racist colonialist rhetoric against aborigines and extolls the good that colonialism has brought New Zealand. It is telling that no member of the audience, full of aborigines, tries to prevent his murder. Te Wheke then terrorizes a husband and wife, killing her, wounding him, burning his house to the ground, and stealing all of their ammunition. Clearly, at this point, Te Wheke has lost whatever moral authority he may have had over his oppressors, and yet Te Wheke is an intellectual. He reads and understands Shakespeare and is fluent in English. With a better fate, he may have been a leader.

Te Wheke is hunted by a British commando unit led by Mr. Scott, a young ideal soldier who grew up in New Zealand. Scott appears to know a Maori woman named Kura; however, exactly how this develops is anyone’s guess. Kura also appears to be familiar with Scott’s Maori friend, but that relationship is equally undeveloped. Also hunting Te Wheke is Williamson, the man whose wife Te Wheke killed. While he starts off as a sympathetic character, the movie sees fit to turn him into a crazy character who claims he can “smell” Te Wheke, invents new kinds of guns, and survives Te Wheke’s attempts to kill him. His loss, as well as the toll it takes on his sanity, is almost played for a laugh.

Ultimately, Utu is a film without a hero. Elliot’s troops have clearly committed crimes against the people of New Zealand; however, Te Wheke has committed equally gruesome crimes against ordinary British people, not to mention his fellow New Zealanders. While Scott would seem a likely hero, his character is underdeveloped and does not provide the moral prism through which the audience can see the situation unequivocally. Perhaps that’s the point. The actions of a hero may be indistinguishable from those of a villain, thereby stripping a war of a side to root for. In the end, the winner may simply be the side that gets revenge, not the side that has the moral right to it.

Utu is in English and Maori with white subtitles. It is available on DVD from Kino.
Posted by Azrael Bigler at 3:27 AM