Review – Why We Fight 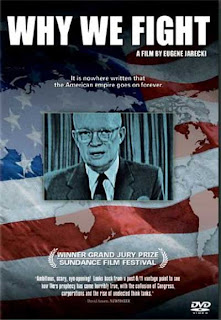 The best documentaries are often those that either show a single story or situation as it unfolds without commentary or analysis or explain a part of history in great detail. I recently watched Daughter from Danang again and marveled at how the directors simply step back and let the story unfold, even when it appears that Heidi is talking directly to them. I’m also reminded of The Long Way Home, a documentary about the plight of Jews after World War II, a subject that I knew a great deal more about when the film was over. A recent trend in documentaries is to show a situation from a particular point of view. This kind of documentary, while working when there is a consensus regarding the assessment of a historical event or story, can be problematic when an events’ historical evaluation has yet to be determined. Why We Fight falls into this category.

Why We Fight is billed as an examination of President Einsenhower’s views on the military, a standing army, and the reasons for going to war. However, while the parts of the film that explore that subject are fascinating, those parts, in fact, are only a small portion of the film. Instead, the majority of the film deals with the Bush Administration’s decision to go to war with Iraq. While this is a worthy subject of a documentary, Why We Fight does not do it justice. It simply presents all of the reasons that people opposed to the war use in their arguments, such as the need for oil, the desire to spread American influence around the world and, the influence of the Vice President and government think tanks. Very little effort is made to present contrasting arguments, and the audience is left with the impression that the film is saying that America is fighting for the wrong reasons.

There is nothing wrong with this message, except that a documentary claiming to be about why America goes to war should show both sides. Moreover, certain conflicts, such as the Korean War, the civil war in Bosnia, and the war in Afghanistan are not discussed at all. How can a documentary about why the present administration went to war be complete without an examination of the war in Afghanistan? It’s as if it is conceding that that war was fought for noble reasons. A better documentary would have compared the reasons for those two wars and provided a clearer example of the right reasons for going to war. Instead, the audience hears once again about Halliburton, Donald Rumsfeld’s visions for the Middle East, and how the U.S. once supported Saddam Hussein, all of which have been analyzed in greater detail in other documentaries.

Perhaps the title should have been Why We Are Fighting in Iraq: One Side’s View.

Why We Fight is available on DVD in Region 1.
Posted by Azrael Bigler at 5:14 AM