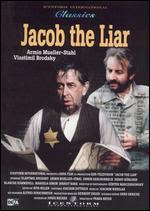 Hope is an empowering feeling. It has been suggested that people who have terminal diseases can prolong their lives if they have it. It is believed that a crowd full of excited, hopeful fans can somehow enable a player to see or throw the ball just a little bit better. Hope, people say, can get one through even the direst situations, if one simply believes that tomorrow will be superior to today. For some, that sentiment is not always easy to come by, though.

Jakob Heym should be forgiven if he has given up hope. His days are spent in one of Germany’s many ghettos. He every move is watched by guards who would not face any punishment if they injured him or took his life. Everywhere he walks, he sees buildings that used to be full of life – the barbershop where he used to get a daily shave, the old restaurant that he used to run – and are now run down and decrepit. And while he envisions more cheerful times, most of his memories are of the woman who got away, a woman whom he may never see again. Jakob’s days are spent caring for his niece Lina, loading boxes onto trucks, and waiting for the day when his block is selected to be “relocated.”

One evening as Jakob is taking a walk, he is ordered to stop and told that he is out after curfew. He is asked if he knows what time it is and what the punishment for being out after curfew is. (The irony of being expected to keep track of time after his watch and clocks have been confiscated is not lost on him.) He is ordered to report to an official and to ask for “fair punishment.” Upon entering the building, he happens to hear a report on the radio stating that the Germans won a battle against the Russians in a city not terribly far away. The news that the Russians are this close fills him with the hope that his miseries, as well as those of the others, will soon come to an end.

The next day, Mischa, a close friend of his, decides that he wants to try to steal a potato, explaining that if he is shot for doing so, at least he won’t die of starvation. Jakob tries to stop Mischa by telling him about the Russians’ position, but his friend doesn’t believe him. It is only when Jakob tells him that he heard it on a secret radio that he friend gives up his pursuit of the potato. Jakob’s friend is transformed almost instantaneously, and soon, the lie spreads, and everyone wants news from the battle front.

Jakob’s lie has an incredible affect on the people around him. For example, Mischa proposes to Rosa, the woman he adores; in addition, Jakob’s former barber Kowalski begins to think about starting a business after the camp is liberated. A woman predicts that soon her husband will return to the stage, and in a brilliantly-shot scene, Lina begins to believe in fairy tales again, that life can end happily ever after. In one scene, a man risks his life to tell people who have been packed into a train to hold on, for the Russians are coming. The difference in the voice of the person on the train is apparent immediately.

There is a sad beauty to Jakob the Liar. The audience is aware that these characters are unlikely to survive, as the ghettos were emptied of their Jewish residents long before the end of World War II. However, there is something wondrous about seeing people who had suffered to such a great extent allow themselves to live and love once again, even if those moments are fleeting. Like Life is Beautiful, Jakob the Liar offers a rare glimpse of optimism in a place normally full of despair. (on DVD)

Jakob the Liar is in German with white English subtitles.
Posted by Azrael Bigler at 11:37 PM