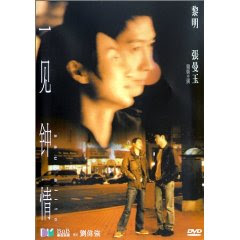 Meeting someone can be an awkward experience. What do you say to someone you have just been introduced to? For instance, imagine that you were looking for a friend of yours at a nightclub and a stranger suddenly approached you, asked you where you were from, and upon getting the answer that the person wants, pulls you to a group of partiers, blindfolds you, and asks you to show your psychic ability. Would this impress you? I think most people would feel so uncomfortable that they would leave immediately.

It is under these conditions that Ellen, a taxi driver in San Francisco, meets Mike, a computer engineer for a dot com. After this meeting, Ellen, played by the great Maggie Cheung, sees Mike, played by Leon Lai, urinating on a wall that she is painting a picture called “Sausalito” on. Somehow, she and Mike end up sleeping together in her cab. If this sounds far-fetched, wait a few minutes. A few scenes later, Ellen returns to the club. Apparently she likes Mike and wants to get to know him. However, when Mike sees Ellen, he does not go to talk to her, so she settles for his friend, sleeping with him faster than she slept with Mike. Mike finds himself jealous, and after Ellen returns, they leave together and on what appears that same evening sleep together. Shortly after, they begin a relationship that because of all of the events that preceded it seems absurd.

Ellen has a ten-year-old son who the films presents as being mature for his age, so mature it seems that he can take care of himself. In several scenes, Ellen leaves him home alone, choosing to spend her evenings at Mike’s house, yet the film presents this as acceptable. Mike is in business with a relative. The movie portrays the relative as being a bit like a gangster. For instance, he shouts orders to his employees and, when Mike doesn’t show up for work, orders people to locate him immediately, as if Mike had stolen money from him. When he finds Mike, his “men” shout out his name and run after him. After grabbing him, they push him against a wall and appear to be going to rough him up. Luckily, Maggie and her fellow cab driver’s converge to prevent any harm from coming to Mike, which as it turns out wasn’t going to happen anyway.

Despite the film’s ridiculous beginning, the film steadies as it explores the developing relationship of its main characters. Ellen struggles to not only fit into Mike’s world but also overcome the scars remaining from a failed marriage; Mike endeavors to prove that he loves and respects Ellen, but hides his company’s financial difficulties from her. These conflicts should be enough to hold someone’s interest, but they aren’t. Too often the actions of the film’s characters are implausible and seem to be occurring simply to create conflict for Mike and Ellen. In addition, it is hard to see Mike’s creation, which is portrayed as a revolutionary idea that will change the world completely, as being the lucrative business that the movie says it is. But this is a movie, and in the movies, success, like relationships, is just a mediocre idea away. (on DVD in places that specialize in films from Hong Kong)

Sausalito is in Cantonese and English. It has white subtitles that are hard to see at times and that sometimes contain incorrect English.
Posted by Azrael Bigler at 5:09 AM