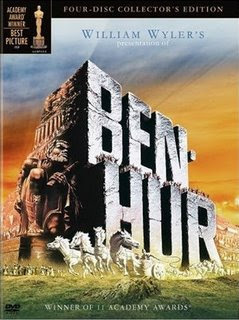 There’s nothing like a six and a half minute overture to give viewers the impression that what they are about to see is an epic of grand and historic proportions. Immediately after, a deep voice sets the stage for the audience. The place is Palestine; the year is 0. It is at the height of the Roman conquest. It is also tax time, and the people of Palestine have been instructed to return home to be counted. A young couple registers and tells the official that are destined for Bethlehem. In Bethlehem, the woman gives birth to a son. The birth is celebrated, as neighbors and wise men bring gifts to commemorate the event. Outside, a bright star shines down on the manger.

Years later, a man returns to Nazareth after a 14-year absence. The man, Messala, the new commander of the Roman garrison in Nazareth, has been sent to restore order. He is a pagan and is therefore dismissive of the prophecy that the people have been whispering about of late. He proposes to crush those disloyal to Julius Caesar, to fight one idea with another idea. He is soon reunited with his childhood friend, Judah Ben-Hur, a Jew. At first, they are friendly, yet Messala soon reveals his prejudices and designs for Nazareth. He implores Judah, a man of peace, to give him the names of those who support rebellion. Judah refuses, thereby drawing a line in the sand and setting the two of them on a collision course. Later during a parade to introduce the new governor, Judah’s sister accidentally knocks a roof tile on him. Judah nobly takes the blame, expecting the authorities to understand that it was an accident. He is shocked when a guard orders him, his sister, and his mother to be arrested. Messala, upon hearing what happened, does not come to his former friend’s aid. Judah is then sent to a galley prison, where he works as a slave for over three years, all the while seething with anger and vowing revenge on Messala. He will get his chance later.

Judah is a complicated character. While proclaiming himself to be against violence, he is quick to resort to it when he is told he is being sent to the galley. He pushes a guard off a flight of stairs, punches another guard, and strangles another. Upon being told that his mother and sister are dead, he is overcome by a feeling that his destiny is to avenge them by destroying the man he holds responsible. His apparent willingness to resort to violence comes out later as well when he criticizes and threatens Rome during a face-to-face meeting with Pontius Pilate. The latter two events occur after his first encounter with Jesus, and one would have to surmise that the encounter, while affecting Judah, does not change him. In addition, by making Judah a man against violence before he witnesses Jesus’ benevolence, the writers have diminished Jesus’ overall impact on Judah. If he renounces violence at the end of the film, it is not that he has been changed by Jesus, but that he has returned to his previous character. He is once again the Judah that his friends recognize and respect.

Ben-Hur is an epic in every sense of the word. It is well over three hours long and tells several stories simultaneously. However, it is also, in every sense of the phrase, a Hollywood film. In typical Hollywood fashion, love comes too quickly for Judah and Esther, especially when she is about to leave to marry someone else; Judah becomes Arries’ slave only to be adopted by him later, after becoming “like a son” to Arries. Judah’s mother and sister are magically cured of leprosy after the storm following Jesus’ crucifixion. However, what labels Ben-Hur a Hollywood production most is the fate of Messala. After losing and being critically wounded during the chariot race, he refuses medical treatment because he is waiting for Judah to come to him. When he does, Judah proclaims that he does not see an enemy in front of him; Messala, for his part, uses his last breath to tell him where he can find his mother and sister. Leave it to Hollywood to always restore a villain to his previous honorable status. (on DVD)

*Ben-Hur is frequently referred to as one of the greatest films of all time.
Posted by Azrael Bigler at 4:43 AM

Labels: 3 and a half stars, reviews, William Wyler