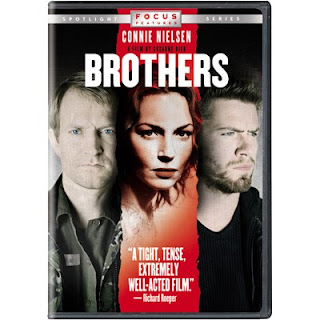 How does a loving father and devoted husband spend his last 11 hours before being shipped to Afghanistan? Are there tears, promises that all will be OK in the end, pleas not to worry about his safety? For Michael, these hours are emotionally taxing. First, he picks up his brother from jail, a reunion that almost ends just after it begins; then he has dinner with his family, during which he has to hear his brother and daughter openly talk about soldiers in Afghanistan shooting anything that moves. Moreover, his oldest daughter does not want him to hug her or give her a kiss good night. Through all of this, however, he is calm, reflective, and humorous, gently enabling others to safely set aside their surface feelings and reveal their fear and insecurity. In the blink of an eye, he is gone, sent into the war zone that is present-day Afghanistan.

His wife Sarah carries on, seemingly with ease. Her husband calls to inform her of his arrival; all she wants to hear is that he loves her. It is as if he has simply gone to his normal nine-to-five job. A missile shatters that illusion and sends the helicopter Michael is conducting a search-and-rescue mission in crashing into the water and bursting into flames. In what must have seemed like a moment since his departure, Sarah is visited by two men in full military attire. Their words fail them. In truth, what could they say?

Michael’s brother Jannik is stunned; his parents do their best to carry on, his mother deciding to organize their long neglected collection of records, only to break into tears when she sits still. Eventually life goes on. Pain subsides, happiness returns, new connections are made. Jannik matures, going from a violent criminal to a responsible caretaker to the family the tragedy left behind. Laughter returns to the children, affection comes back to Sarah, normalcy revisits the family. In a flash, though, that too is gone, for Michael returns, having been rescued from a Taliban camp where he’d been held captive. However, the person that returns is a far cry from the one that left months earlier.

Brothers, directed by Susanne Bier, shows a side of war that few want to see. Pictures of hostages being released are common on news reports, but images of soldiers being held hostage and the atrocities that they witness are less common. As days go by, Michael has new bruises on his arms and face, attesting to the daily abuse he has to endure while in captivity; when not being tortured, his days are spent sitting in an empty, dirt cell, his only companion a young frightened inexperienced soldier whose spirit he tries his best to raise. More disturbing is what Michael has to do to stay alive. The term post-traumatic stress disorder does not even come close to describing the anguish and torment that Michael returns home with.

Brothers is a tough film, for it never takes the easy way out. There are no miracle antidotes, no incredible therapy sessions that begin the healing, no family conversations that elicit curative tears, and it is clear that he is getting worse, not better. Michael spirals out of control and deeper into depression. In one telling scene, Michael’s daughters tell their mother that they prefer Jannik to Michael, and one even screams at Michael, “Why couldn’t you stay dead?” Michael can only sit and listen, as the rage and suspicion within him builds to what can only be a destructive conclusion. It would be dishonest to portray this situation as one capable of being solved in two hours, but thankfully Brothers is a remarkably honest film, even if the story it tells is one that some may not be ready to see. (on DVD)

*Brothers is in Dutch with English subtitles.
Posted by Azrael Bigler at 7:51 PM