Review – when will I be loved 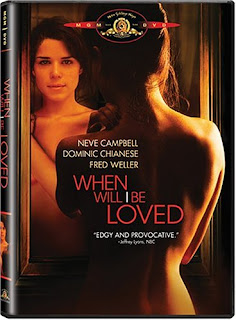 when will i be loved is one of those rare films that gets better as it goes along. Characters become more interesting, their motivations become suspect, and situations become tenser with each passing moment. It is unfortunate then that it backs itself into a corner. The film stars Neve Campbell as Vera, a woman who is apparently as comfortable as one can get with one's sexuality. On one block, she successfully gets two phone numbers and has a frank discussion about the underlying meaning of her potential employer's honorable-sounding speech about how he wants to help her grow and transition. As she is having this discussion, her boyfriend Ford (Frederick Weller), a thoroughly sleazy man who is one step away from achieving the status of a pimp and who Vera's father refers to as a "hustler," is busy propping himself up as a man with a bright future in the entertainment business. As he networks by phone on his way to meeting influential people, he has an air of self-importance that seems unshakable; not even a chance encounter with a woman whom he swindled out of $9,800 can break his groove.

Ford is also trying to strike up a business relationship with Count Tommaso Lupo (Dominic Chianese), a media mogul who couldn't be less interested in the women that he represents. As Lupo explains, he is only still talking to Ford for one reason: He has been promised a "meeting" with Vera, whom he saw at some point in the past and has wanted a fling with ever since. The question is: Is Ford so hungry for money that he would stoop to asking his own girlfriend to sleep with someone just to advance his own career? Of course, he is. As he explains it, this is commendable. He is not selfish enough to restrict her to just one man, he tells her. He is a charitable man who is willing to share her with other people until she realizes her own identity. He clearly doesn't know her as well as he thinks he does.

The dialogue between Vera and Ford crackles with wit and intrigue. There is an ease to their conversations that is fascinating. In fact, rarely a moment goes by when one of them isn't talking to the other and when the other doesn't appear to be actively listening to what the other has to say, yet there is also an degree of distrust as the conversation goes on. He brings up the plot of Indecent Proposal as if he had seen it the day before and it had caused him to think deep thoughts. In the same breath, he mentions Lupo. It takes Vera a split second to make the connection. Her reaction is perfect. She goes from being hurt to putting a plan in motion in no time at all. The plan begins with her agreeing to meet Count Lupo.

It could be said that at this point in the film when will i be loved has a lot going for it. However, it is soon apparent that the film has boxed itself into a corner. There are not many options left for a movie of this sort, and as the tension mounts, it is clear that the movie is taking the identical route of almost every other film in this genre. This does not make for a bad movie, but rather a movie that starts slow, picks up in the middle, but then fizzles out in the end because it has nothing original to say. Throughout the film, the actors give strong performances, in particular Neve Campbell, who gives what some have called the best performance of her career. If only the writer has gone off the beaten path a few more times. (on DVD)