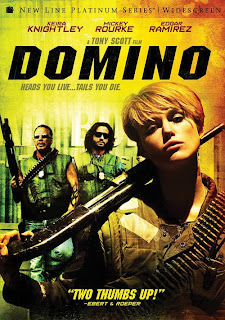 Sometimes true stories do not make for the best movies, simply because the stories are so unique that audiences have a difficult time believing they could actually happen. Many reviewers, for instance, found it hard to buy that high school students could learn poetry from Bob Dylan's songs and used that opinion to dismiss Dangerous Minds as proof that Hollywood had no idea how teachers actually taught, even though that was the exact method that Louanne Johnson used in real life. Domino Harvey's story is equally tough to accept. According to Domino, Domino Harvey (played by Kiera Knightly) got her job as a bounty hunter by confronting a seasoned bounty hunter named Ed after he and his partner tried to leave a seminar on bounty hunting without delivering his promised speech. To do this, she throws a hunting knife through his windshield and then berates him for not giving people what they paid for. She then proceeds to ask him for a job. She is granted one, but refuses to give her whole name, a sure deterrent to employment in most other situations. In no time, she is handed a gun and taken on a job. If this seems unrealistic, wait a moment. In the following scene, the job goes wrong, and Domino finds her team pointing their weapons at a group of men who are aiming more weapons at them. To diffuse this potentially deadly situation, she offers the leader of the group a lap dance, leaving the audience to let out a collective, "What?"

Domino mostly focuses a case that went wrong, which for someone in her field can prove fatal. Domino's team is asked to apprehend four young men who are believed to have pulled off an eleven million dollar robbery. Domino's squad fulfills their mission and turns the four men over as ordered. However, they are not turned over to police, and Domino begins to suspect that this is an inside job and entirely out of the boundaries of the law. This all sounds clear. However, the movie employs multiple flashbacks to tell this tale. This combined with the fact that Domino withholds information from the audience so that later events are shocking create unnecessary confusion for audience members.

The characters in Domino are rather one-dimensional. Domino herself remains an enigma. She is a woman from an upper class family who rebels against the 90210 lifestyle she sees around her, but what exactly makes her interested in danger, violence, and guns is never fully explained. Equally one-dimensional are her partners, Choco and Ed. Choco is supposedly in love with Domino, even though they never have anything close to an in-depth or personal conversation. Ed is supposedly a veteran bounty hunter, but his rapid acceptance of Domino more closely resembles the actions of an amateur than those of an expert. By the end of the film, he is reduced to being Domino's sidekick.

Perhaps it is unfair to judge Domino too harshly. It is after all an action film, and action films are known for requiring viewers to suspend belief. However, Domino purports to be based on a true story, and it should therefore ultimately be believable. It is not. Director Tony Scott turns a tense standoff into a silly rather unbelievable action sequence replete with hundred of bullets flying in every direction, culminating in an explosion that is clearly fictional. Moments earlier Domino's van flips over countless times, and yet every person in the van walks away unscathed. In fact, Domino is so healthy that she takes to opportunity to consummate her love with Choco in the middle of the desert, leaving the audience to once again yell, "What?" (on DVD)