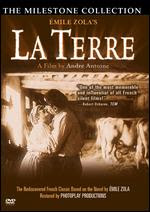 It may seem odd to some that drifters could arrive in a new town, inquire about employment, and if he's lucky be given room, board, and a job in the blink of an eye. Yet the time when this was commonplace was not that long ago. Andre Antoine's 1921 film La Terre begins with one such drifter walking along a dusty road. As people see him, they smile, as if they had seen him on a regular basis all of their lives. Not even the sight of a man's niece walking with such a person is enough to cause alarm. Perhaps he secretly senses that the danger to him comes not from the outside world but from those closest to him.

The drifter is named Jean. He steps into a village that at first glance seems ideal. He not only gains employment quickly but also meets a beautiful woman - two in fact, and both of them seem to have an immediate interest in him. It is a village in which children learn their fathers' trades and relatives take care of each other; they even do it with smiles on their faces. Here, it seems as if every young woman has a caring man just waiting for the perfect moment to pop the question. However, beneath the cheerful demeanor of the residents lies a resentment and fury just about to reach its zenith.

It starts innocently enough. Pere Fouan, tired and weakened from the daily grind of working the land, decides he has had enough. He arranges to have his land divided up amongst his three children, an arrangement that involves his children paying him for the deeds to his nine lots. The deal is simple; Pere's children, Buteau, Hyacinthe, and Fanny, will pay him $100 per lot and provide him with firewood, food, and drink. Even that seems unreasonable to Buteau, one of Pere's spoiled and greedy children, and soon after the lots are divided up, the firewood becomes twigs, the bread stale, the wine like vinegar and the financial support infrequent. His children heed his pleas for help with indifference, clearly not seeing any need for the father who provided for them. Pere will ultimately be forced to go from house to house searching for the respect that he feels he deserves and having an arduous time finding it.

Buteau, who began the film beaming with joy at the prospect of marrying his sweetheart, Lise, becomes the tormentor of Pere's niece, Francoise, stalking and grasping her with an intensity that would put any woman on alert. To make matters worse, Buteau claims the legal authority to control Francoise's life until she is twenty-one, meaning he can deny her wish to get married. As a consequence, she is made a virtual slave to Buteau and Lise, who had previously been Francoise's closest friend and confidant. The constant threat posed by Buteau leads Francoise into a moment of passion with Jean which will change her fortune completely.

It would seem logical that Jean, with his strong sense of justice and righteousness, would stand up for Pere, who finds his situation increasingly desperate, and yet Antoine avoids this cliché, and the audience is left to wonder just what will become of Pere, as it seems all around him are abandoning him.

Once considered a lost film, La Terre's surviving print is incomplete, and as a result of that, several stories, particularly those involving Jean's relationship with his boss, remain unresolved. In addition, much of what survives involves Pere going from one child's house to another, which gets a bit tedious after a while. However, La Terre is also filled with interesting characters and compelling plotlines. Particularly humorous is Hyancinthe, played by Milo. In one scene, he is caught poaching by a local official who just happens to also be his drinking buddy. Hyancinthe somehow convinces him to come in for a drink while he is writing out his ticket. Also of interest is Buteau, intensely portrayed by Jean Herve as the kind of man who is quick-tempered and embraces violence at the drop of a hat. However, the heart of the film lies in its more sympathetic characters, and here, the film succeeds as well. I found myself caring for Pere, Jean, and Franciose and hoping that they would find a degree of normalcy and safety. It is a pity that La Terre only exists in its present form, but a blessing that it exists at all. It deserves to be rediscovered and appreciated. (on DVD from Image-Entertainment)