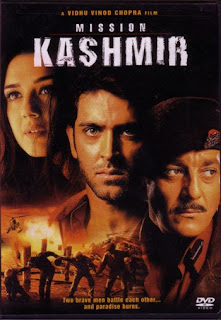 Perhaps only in Bollywood could a terrorist become so overjoyed at the sight of a childhood friend that he runs on stage and joins in a musical number already in progress. Once onstage, he moves and shakes in a way quite out of character. When the music stops, his brooding returns, and he is once again a man plotting the murder of a man he once called father. This is just one of the oddities found in Vidhu Vinod Chopra's 2000 film Mission Kashmir.

Mission Kashmir begins with a fascinating look at a place in which terrorist leaders issue religious fatwas against doctors for treating people of different ethnicities. The edict serves as the catalyst for two tragedies, the slaying of a doctor and the death of a high-ranking officer's son. Later the father of the deceased boy, Inayat Khan, played by legendary actor Sanjay Dutt, leads a raid on the man he hold responsible for both deaths Malik-Ul Khan, a violent advocate of Kashmir's independence. The firefight that ensues achieves its purpose, the death of Khan; however, it also brings tragedy to Altaaf, an eleven-year-old boy whose entire family is accidentally killed in the raid. Understandably, Altaaf blames the officer he saw firing bullets indiscriminately. That officer, Khan, was wearing a mask, and the image of the eyes behind the mask begins to haunt the young Altaaf.

Against his better judgment, Khan agrees to his wife's request that they adopt Altaaf. Keeping the truth of the origin of their relationship with him a secret, Khan and Nilu begin the difficult process of reconciling the loss of one child and learning to love a second. After months, they are successful, yet as they begin to put the past behind them, it comes crashing back in the form of a vengeful boy who having discovered the truth hides with a gun in his hand waiting for his parents' assassin to return. Ten years later, Altaaf's anger has not subsided, and his return begins a chain of events that will bring tragedy and sorrow to all of those in his and Khan's lives.

Mission Kashmir is several stories at once. It is the story of Kashmir itself, a land engulfed in civil war and ethnic division, a land where people are distrusted and discriminated against because of the ethnicity of their parents. It is the story of two parents grieving the loss of two children, one through a tragic accident, the other through circumstances beyond their control. It is the story of two childhood friends separated for ten years who are reunited and fall in love, and it is lastly about the effects of anger, hatred, and violence on youth and how those feelings can be exploited by those wishing to achieve political or religious change through bloodshed.

However, it is also a musical, and some of the strength of its varied stories is lost because of the inclusion of the musical numbers. It is one thing to use a musical number to illustrate the care that a mother uses to put her child to sleep; it is quite another for the meter of a song to be kept by a ticking bomb as a man tries to apologize to his wife for losing his temper and bringing some of the mayhem he experiences at work home with him. The scene has the undesired effect of making the man, in this case Khan, look foolish and also of lessening the danger that he and his wife are in. The oddly placed musical numbers have another unintended effect: They rob the actors of opportunities to truly show their range as actors, reducing extraordinarily emotional moments to fun and silly musical interludes. It would have been more powerful to hear both Khan's apology to his wife or Altaaf's explanation of the psychological scars he carries with him daily in their own words.

In addition to the ludicrous scene in which Altaaf discovers the mask that Khan used in the raid - for why would a man intent on keeping the past a secret keep such a thing at home? - Mission Kashmir suffers from a poor and predictable final act. Like most Hollywood movies, most recently the Oscar-winning The Departed, the hero becomes what he has sworn to protect society from, a cold-blooded killer. Khan kills two jailed unarmed terrorists with impunity and then seeks to convince the leader of the terrorist plot that he cares more about personal revenge than his own country. In what can only be described as an act of illogical insanity, the terrorist believes him. Eventually, the film is left with only one plot device remaining, the overused and often ridiculous tactic of redeeming the villain at the end of the picture. That it would be used at all reeks of desperation. (on DVD)

*Mission Kashmir is in Hindu, Urdu, and English with English subtitles.
Posted by Azrael Bigler at 12:43 AM