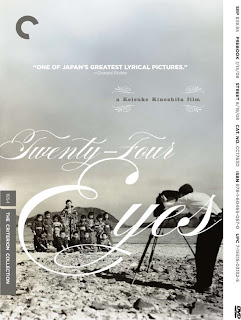 It's hard for me to put into words my esteem for Twenty-Four Eyes. Doing so is like looking at one of Da Vinci's masterpieces and attempting to explain how you feel; words may simply never do it justice. As I watched it, thousands of pictures flashed into my head. I recalled the scene in Akira Kurosawa's Madadayo in which the teacher looks out at the people in front of him and sees his students' grandchildren paying homage to the their grandparents' mentor. I remember the innocence of Anna in Nikita Mikhalkov's documentary Anna, which documented his daughter's metamorphosis from innocent child to indoctrinated teenager during the 1980s. Images of the students in All Quiet on the Western Front ripping up their textbooks came into my head. I recalled the personal dedication of teachers such as Dionna Encarnacion, a public school teacher in San Francisco, who taught the same group of students for five years and devoted years of her life to trying to ensure that they would succeed academically. If those seem like an odd collection of images - respect, loss of innocence, nationalism, and commitment - that only shows the range of the film that conjured them up.

Twenty-Four Eyes­ is the story of Hisaki Oishi (played perfectly by Hideko Takamine), a first-year teacher on the Japanese island of Shodoshima in 1928. To say that she is unlike others teachers, or for that matters other residents of the island, would be an understatement. While the women of the island wear traditional clothes and walk everywhere, Oishi wears a suit and rides a bicycle. To the adults of the island, Oishi is dressing like a man and flaunting her wealth. They further disapprove of the way she refers to children by their nicknames. It makes no difference to them that their children prefer these names to their given names.

The island of Shodoshima is inhabited by mostly farmers and merchants, and many of them are impoverished. Oishi's students walk themselves to class and work after school; many of them are being groomed to take over or work in the family business. Into this world steps Oishi, a woman whose own background has taught her that education should be had by everyone and that having and following your dreams is essential. Oishi's twelve students take to her so well that when she tears a tendon, they decide to walk to see her, not realizing that she lives clear on the other side of the island. Five years pass, and at the beginning of what should be the student' sixth grade, politics and poverty are beginning to take their toll of the island's inhabitants. A teacher is accused of being a communist, and Matsue, one of Oishi's students, is forced to drop out of school after her mother dies. Later that year, while writing a paper on their hopes for the future, Fujiko, another student, breaks down in tears. It is impossible for her to have hope for the future, as her family's house has just been sold and she may have to move. That same year another student will drop out, citing her mother's need for her to cook at home; in addition, her male students begin to talk about their interest in joining the army - this as World War II is just around the corner.

Twenty-Four Eyes is about more than just the impact that a teacher has on her students. It is also about change. At the beginning of the film, each of Oishi's students exhibits the attributes of children everywhere; they are naïve, playful, and inquisitive; some are shyer than others, some leaders, some followers. The audience gets to know each of these students and hopes along with Oishi that they can achieve if not greatness at least a sense of personal fulfillment. As it becomes clear that that will not happen for all of them, the audience sympathizes with their plights and understands Oishi's growing disillusionment with a system that she cannot change. Film critic Tadao Sato once wrote that Twenty-Four Eyes has "wrung more tears out of Japanese audiences than any other post-war film." Watching it, it is easy to see why.

Twenty-Four Eyes takes place during a time when the idea of getting a balanced education clashed with both the patriotic fervor sweeping through Japan and common beliefs, be they born out of financial necessity or tradition. As a consequence, young girls will take menial jobs to help their parents out financially, and young boys will go off to fight a war they are taught it is honorable to die in. Very few of them will end up in the career that they had wanted for themselves, and the reasons for this will have nothing to do with their own personal shortcomings. As Oishi stands in front of the next generation of students at the end of the film, she can only hope that the future is brighter for these twenty-four eyes than it was for their predecessors. (on DVD from Criterion Collection)

Four and a half stars

*Twenty-Four Eyes is in Japanese with English subtitles.

*Twenty-Four Eyes beat out The Seven Samurai for Best Picture of the Year at the Kinema Junpo (Japan's Oscars) in 1955.
Posted by Azrael Bigler at 9:45 PM

Labels: 4 and a half stars, Japan, Keisuke Kinoshita, reviews