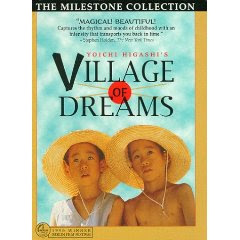 Films about adults looking back on special moments in their childhood are commonplace. Usually they are about people discovering themselves during a particular event, such as being on a baseball team, trekking to see a dead body, or spending a summer with a grandparent. However, who we become is rarely the result of one individual period of time. Rather, it is a collection of moments, people we saw, things that were said to us, actions we took but shouldn't have, opportunities for action that we regret not having taken advantage of. Higashi Yoichi's 1996 film Village of Dreams recognizes this, and what it reveals about its characters speaks volumes about the impact of childhood. At the same time, the film leaves many questions unanswered, which is not necessarily a bad thing.

Village of Dreams is a collection of scenes from the early lives of Yukihiko and Seizo Tashima, two identical twins who grew up in a part of Kyoto called the Kochi Prefecture. It is a time that they look back on in wonderment. As the film opens, the two of them have come together to create a picture book of the childhood they have such sweet memories of. As they look at their first drawings, a calm joy comes over them, and the viewer is taken back to 1948 to experience this time first-hand.

At first glance, Yukihiko and Seizo's childhood is remarkably unaffected by the changing world around them. While the adults around them speak of land reform, adoptions, and MacArthur, Yukihiko and Seizo, played superbly by Shogo and Keigo Matsuyama, spend their days fishing, going to school, and playing together. They are also said to be menaces. They play jokes on teachers, cut their neighbor's plants, and throw rocks at the lights that another neighbor uses to light his garden at night. As can be expected of youth, they seem completely unaware of the cost of their actions. In addition, as they tell it, the Kochi Prefecture that they grew up in was a bit like Pan's Labyrinth. In one scene, the two boys try to catch a fish that appears to be carrying on a conversation with them, almost daring them to catch him. They are also convinced that they saw the legendary Shibafen, some sort of creature that appears to have a dark, whiskered face and can swim and talk underwater. The voice of this creature is believed to be so powerful that it causes Yukihiko's lungs to get swollen, resulting in him needing to get his tonsils taken out.

In most films like Village of Dreams, the audience is clear exactly why a time in the past was special and how the experience changed the main characters by the end of the film. This is not true of Village of Dreams. In a more predictable film, every new detail that the children learn as they grow up would somehow be relevant to an experience towards the end of the film; however, when Yukohiko and Seizo learn about the physical differences between boys and girls, it is presented as just a normal aspect of life and one having no immediate affect on them. Later, when they accidentally get their lines entangled while fishing, they go at each other with an intensity that is unnerving, kicking and hitting each other repeatedly and letting out loud wails of anguish. Yet in the very next scene, they are joining forces to catch a fish. Throughout the film, they never speak of the confrontation. Perhaps what impacts their lives the most is the friendships they have with two less fortunate children, Hatsumi, who goes to school every day barefoot, and Senji, who has recently been released from reform school. In a more predictable film, Yukohiko and Seizo would stand up for them and teach their neighbors that they should not be discriminated against. However, they do not, and it is wonderfully unclear how exactly their sympathy for their two friends affected their later lives.

If what we remember about childhood is a collection of snapshots that somehow influence or contribute to what we later become, then Village of Dreams is the perfect example of that. As I watched Village of Dreams, I was reminded of Nikita Mikhalkov's excellent Close to Eden, for each of them offer glimpses into remarkable times in ordinary people's lives. Moreover, in each film, the glimpse is fleeting, as time and change have removed any chance of the next generation having an experience similar to Yukohiko and Seizo's. After all, what we remember is as much a mirror into whom we are presently as it is into what we and the world around us will never be again. (on DVD)

*Village of Dreams is in Japanese with white English subtitles.
Posted by Azrael Bigler at 10:40 PM