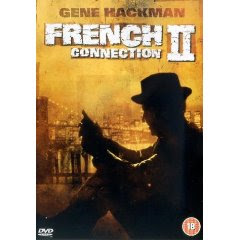 Popeye, I know you've been on the police force for fourteen years, but I feel the need to offer you a piece of advice. I'll keep it brief, though. My advice consists of two simple words. Maybe if you'd thought of them, you'd have avoided the catastrophe that befell you in France. The words are sketch artist. Not the words you were expecting? Let me explain. When you are the only person in the world (apparently) who has ever seen a high-level drug dealer, sit down with a sketch artist and describe to villain to him. Then let the sketch artist use his talents to create a wide array of pictures, for example, drug dealer without a beard and mustache, drug dealer with his hair dyed black, drug dealer dressed in punk clothing, drug dealer in drag. I could go on, but I think you get the point. If you suggest this and your police chief still insists that you are the only person who can identify him, then you know that something is amiss, especially given your experience in France. I mean, the villain looked exactly the same as he did four years earlier, didn't he?

Also - and it may not be my place to suggest this - when you arrive in a foreign country, would it kill you to be polite to someone? You insinuated that the taxi driver was trying to rip you off in the very first scene. That's not the best way to make friends. Your treatment of Henri Barthelemy was even worse. Here's a guy who tried to work with you and protect your life, and you insulted him. Even after you got an undercover cop killed and threw stereotypes in his face about French police being lazy, he stood by you, helping you go cold turkey after the evil Charnier had made a drug addict out of you. Hey, he even listened to you ramble on and on about baseball and southpaws. To further prove his noble character, he disobeyed a direct order to put you on a plane back to the States, and it appears you never once uttered a simple, "Thank you, Henri."

On the plus side, Popeye, I must say that you are in amazing shape. Seeing you keep up with a moving streetcar was impressive; imagine my surprise at your ability to catch up with a boat. I guess you would have made a good base runner after all. I also have to acknowledge your keen insight into French law. If you'd have told me that an American could set fire to a hotel in France and not face charges of arson, I'd have told you were crazy. However, there you were doing just that.

Oh, Popeye, one last thing. I noticed that when you got to France, you were a little frustrated by extremely limited number of people who could speak English. Having traveled abroad, I can sympathize with your frustrations. When that woman on the volleyball court wouldn't come and talk to you despite the fact that you were a complete stranger, I thought to myself, "It's too bad that there was a language gap between them. They would have made a good couple." But cheer up, Popeye. All is not lost. If what I saw of your experiences in France are to be believed, when there's important information to be passed on, it's done so in English, even if the two people talking appear to both be French. Imagine that!

In closing, Popeye, take care of yourself. After all, the next villain might not wait for you to recover from your injuries, as well as kick your drug habit, before trying to move his massive heroin shipment.

*The French Connection II is on DVD.
Two stars
Posted by Azrael Bigler at 4:44 PM