Review – Once Were Warriors 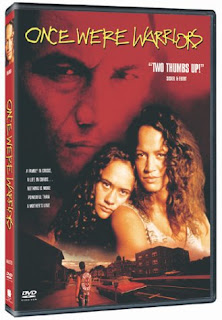 The very fact that Beth and Jake’s backyard directly faces a busy freeway speaks volumes about their financial plight. As the camera follows Beth on her way home from shopping, we see that she is on a narrow walkway that runs parallel to the freeway. As she walks, we are exposed to the rest of her neighborhood, run down in some places, dirty in others, and yet oddly never evoking a feeling of danger. As Beth continues her walk, the camera cuts to her husband Jake, who at that moment is at a market buying fish. Upon arriving home, the two of them show a degree of affection that is comforting. They smile at each other and reveal a passion that still burns after eighteen years and five children.

Yet there are signs that their seemingly idyllic marriage may not be so perfect after all. Of their five children, two of them are already headed in the wrong direction. Their eldest son Nig is determined to join a gang; their second eldest, Boogie, is already into crime and in trouble with the law. And then there is the alcohol and the violence. Jake’s evenings are spent in the local bar chugging down beer after beer and using his fists to handle local bullies when the opportunity presents itself. He does not even attempt to use reason. However, judging by the reaction of the bar attendants, this behavior is normal and even encouraged.

Late one night Jake (Temuera Morrison) invites his friends from the local bar to his home for a late-night party after Beth has already put the children to bed. One expects Beth to be annoyed and for an argument to ensue. Instead, we see Beth with a drink in her hand laughing and talking about her husband’s advances earlier in the day. Later, the two of them sing a duet together. Boogie remarks that they only seem happy because they are drunk. Their daughter Grace agrees but puts a more positive spin on it. As she explains it, it is when people are drunk that they express their true feelings. And then violence shatters whatever tenderness the moment had allowed them.

Once Were Warriors is about a family in crisis, and it is a crisis that the movie presents as having been foreseen. We learn that Jake and Beth are from different classes and that Beth married Jake despite her family’s disapproval. We learn that their marriage had been one born out of love and that despite all that has transpired, it is love that still binds them together. However, they live in a community that seems to have lost its way, one in which domestic violence is accepted as normal and ending the evening in a state of drunkenness is the sign of a good time, not the warning signs of a potential catastrophe. At one point, Beth (Rena Owen) seems to blame herself for the beating she takes at the hands of her husband, saying that she was always speaking up when she shouldn’t be.

It is hard to know what to think when Beth and Jake suddenly revert back into the loving couple they were when the picture began. Yes, they have their tender moments. Yes, they seem to compliment each other in an odd way, but it can only be a matter of time before Jake’s rage reappears. The only question is who he will take it out on next. He is a man who wants to be respected, valued, and looked up to, yet he has neither the self-control nor the inner strength to be the kind of person who is. It is both tragic and logical that he can knock out a rude bar patron but when faced with a family emergency stands petrified, unable to even utter a single word.

As the film moves along, there are moments when I felt as if the movie were hinting at something elitist. For instance, Beth’s family had warned her not to marry Jake, that Jake was an acceptable choice. Was it Jake alone they were rejecting, or was it his ethnicity? Futher giving this impression is the movie’s assertion that troubled youths can be strengthened out by focusing them on traditional ceremonies and rituals, as if one cannot become a moral human being without them. Later, when we meet Beth’s family, we immediately notice the striking differences between them and the crowd that Jake hangs out with, especially when it comes to their dress and mannerisms. However, it bears mentioning that Jake and Beth’s situation may never have deteriorated to the extent it has had Jake not been rejected in the first place. Isolation, after all, can breed powerlessness and frustration. As Beth explain it, once their people were warriors. Now some of them are at war with themselves, and the casualties in this kind of war are often the innocent. (on DVD)