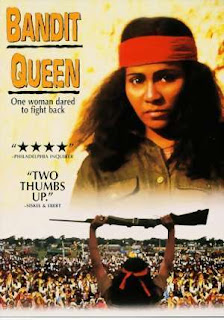 There are times when I am made to doubt the existence of moral absolutes. One such time came when I heard a young woman say the following: “What was I born of? An act of love or violence?” That such a sentence could be said speaks of an injustice that is hard to fathom let alone watch. What are we then to make of a woman who turns to rebellion, Robin Hood-style theft, and ultimately murder to avenge the crimes that have been wrought upon her and from which she is in perpetual danger of reoccurring? It is enough to make one mad, and yet it does not claim the mind and soul of Phoolan Devi. Bandit Queen, directed by Shekhar Kapur, is her story, and it is not an easy one to watch.

Bandit Queen begins when Phoolan is just 11. A man has come to offer her family a bicycle and a cow in exchange for their consent to his marrying young Phoolan. His reason for making this proposal is practical. As he explains it, his mother is old and needs someone to take care of her. Phoolan’s mother begs her husband for more time, but her father resists, saying that an agreement has already been struck. After the wedding, Phoolan clings to her mother; her father separates them and pushes her toward her much older husband.

In her new house, she is treated as a servant, forced to fetch water, even though she has barely the muscle strength to hold the container upright. While performing this duty, she is berated by young boys and chastised by older women for not realizing that she must get water from a different well than the one they are using. They, after all, are upper-cast, while Phoolan is not. This is not the only area in which people born into the lower-caste are made to feel inferior, for as Phoolan realizes later, her word is worth nothing when it is contradicted by someone from the upper-caste, a fact that puts her in constant danger of being sexually assaulted by men from the privileged class. Equally alarming is the fact that few from her own caste come to her defense, many – her own father included - out of fear and powerlessness and some – in particular her own aunt - out of jealousy and a lifetime of conditioning that has taught them not to recognize or emotionally respond to what they see around them. The only thing many of them can do is pull their children inside and close the doors to the injustices that are occurring outside.

Phoolan’s tale is tragic and tough to watch. The rape at the hands of her husband when she is just 11 and the later rape and torture by policemen in her family’s village are just the beginning of the tragedy that befalls her, for she is surrounded by powerful men who see nothing wrong with beating and assaulting a woman of lower-caste. One of them even tells her, “What else are you for?” This is said at the beginning of a three-day imprisonment, during which she is continually raped by a constant stream of men who see nothing wrong with having their way with a woman whose hands are tied behind her back. However, while another person might have surrendered to a life of misery or found a way to end her own suffering, Phoolan is driven by an urge to persevere that is admirable. Throughout every act of injustice done to her, she fights, resists, screams, and curses the men who seek to destroy her honor and spirit. Try as they do, they ultimately fail, for she never submits. Later, with the help of her one true love, Vikram Mallah Mastana, she will begin to exact her revenge.

It is a revenge I must say I was never fully comfortable with, even if I understood her decision to resort to the only means available to her, violence and bloodshed. When police are part of the problem, when a person’s words are worthless in court, when authorities think nothing of poisoning rivers in an effort to get one to surrender, when one can be murdered as one sits on a rock in broad daylight, what other recourse is available than the act of taking up arms against those who oppress you? I don’t have an answer. However, the faces of the wives, children, and grandparents left behind as Phoolan avenges herself are enough to make one understand the futility of it all. Phoolan Devi may have been justified in pursuing revenge, but that doesn’t make the carnage any easier to accept.

As the movie makes clear, Phoolan’s story is unfortunately not unique. In the background are hints of other injustices. In one scene, SriRam, the upper-caste leader of Vikram’s gang, calmly talks to a police officer as three police officers are kicking a helpless woman lying on the ground. Later as Phoolan and her gang are ransacking a small village, a young girl runs out and grabs onto Phoolan. Phoolan is told that the young girl’s father gets drunk a lot, perhaps hinting of other forms of abuse when he is under the influence of alcohol. Phoolan can only give the girl some of the bounty she has collected and hope that with it she will have a better life than Phoolan herself. Judging by the number of children shown already desensitized to the belittling and abuse of women of lower-caste, this hope may be fleeting. (on DVD)

*In Hindu and English with English subtitles.
Posted by Azrael Bigler at 9:17 PM