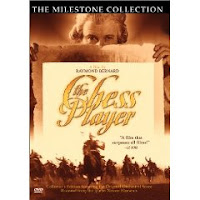 I have a feeling that present-day audiences may enjoy the first half of The Chess Player more than they do the second. This does not mean that the second half is poorly-made, but it does require the viewer to have both an understanding of history and the ability to put oneself into the mindset of someone living during the late eighteenth century. The first half of the film deals with issues that are still easily accessible - freedom, injustice, and persecution, to name a few - while the second half involves dated technology and a belief system that many today may not easily see as realistic.

The Chess Player begins in 1776, four years after Polish Lithuania fell to the empress of Russia, Catherine II. As the film opens, the residents of the town of Vilnius are suffering. Russian soldiers march through deserted streets, and anyone in their path is subject to abuse. A homeless woman, for example, is whipped and mocked by passing soldiers. Those hoping for independence find themselves having to hide in secluded areas. One of these areas is the Chateau Vorowski, where Polish soldiers dare to sing the banned “Hymn of Independence,” a song evoking such powerful feelings that grown men cry, perhaps remembering the days before the occupation.

At the party is Count Boleslas Voroski, the leader of a Russo-Polish regiment that exists simply to test the loyalty of the Polish people. His position in society is made clear immediately, for Boleslas stands on stage and leads his fellow soldiers as well as the other guests in song, an act that would carry a heavy penalty if he were discovered. Accompanying him is Sophia Novinska, women who has come to be seen as the symbol of the nation after a gypsy prophesized that freedom would be reborn through her, despite the fact that she is only sixteen. Of course, Boleslas harbors deep feelings for her, feelings - it should be noted - that are unrequited. Sophia is also being pursued by Prince Serge Oblomoff, one of Boleslas’ good friends despite the fact that he is not only Russian but also a soldier.

Conflict begins later when a Russian soldier decides to force himself on a Polish woman named Wanda, reasoning that she is “just a Polish dancer.” However, she is also an acquaintance of Boleslas’, and he comes to her defense, killing the offending officer. This action causes an all-out war between the Polish and Russian soldiers at the party, and it quickly spreads to include Polish citizens yearning for independence. However, it is a war in which the Poles are outmatched, and soon defeat is at hand and Boleslas is in hiding with a heavy bounty on his head.

Up until this point, The Chess Player has had a global focus, but from this point on, the film becomes focused on not the plight of a people under brutal occupation but Boleslas, who must escape Lithuania in order to survive. In this attempt, he is aided by Sophia, Wanda, and the mysterious Baron von Kempelen, a man who constructs automatons as a hobby and who has a connection to both Sophie and Boleslas. His hobby, to no one great surprise, proves to be extremely helpful.

To appreciate the second half, one must remember that in the late eighteenth century, machines were proof that anything was possible. It was the time of the Industrial Revolution, and at that time, science, technology, and magic were all merged. A scientific or technological demonstration often had the feel of a magic act. For example, it was not uncommon for a scientist or inventor to open boxes and doors to show audiences that what they were viewing was not a trick. The Chess Player takes place during this time, and the character of Kempelen is based on an actual scientist, Hungarian Wolfgang von Kempelen, who invented an automaton known as “The Turk.” It was not uncommon for people to view automatons with wonder, and while artificial intelligence would not begin to become a reality for over a century and a half, people in the late eighteenth century had no reason not to believe that automatons would soon be able to think or talk – that is, if they were not able to do so already.

Even in this context, the second half of The Chess Player is difficult to get completely involved in. Too much of it resolves around a love story that is not well thought out, and because of that, the struggle for freedom in Lithuania is almost completely forgotten. There is also a second romance involving the Prince’s and Sophia’s assistants. This part of the story is played for comic relief, and it distracts from the seriousness of the main story. Finally, a key element of the second half involves Kempelen’s army of machines. While I can see how machines could be used to perpetuate a hoax at that time, it is hard for me to accept that they could be programmed to attack an intruder or that someone would be so petrified by slowly approaching automatons that he could not easily exit a room.

Still, The Chess Player is consistently interesting, even if it is unevenly paced (especially in the beginning) and has a few over-the-top performances. Watch for the Empress’ illegal move, and before you say that it could never happen, you should know that Napoleon tried it three times. After the third time, the machine responded the same way as it does in the movie. (on DVD from the Milestone Collection and Image-Entertainment)