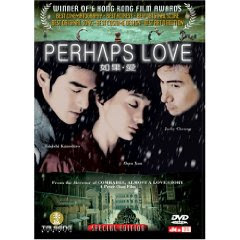 Peter Chan’s Perhaps Love begins with a variation of Shakespeare’s seminal “All the world’s a stage” speech. A man on a lonely, quiet bus tells us that everyone has a film and that from these films people are edited out. Others think themselves the stars of their films when in reality they are bit players, providing they don’t end up of the cutting room floor at the end of someone else’s revisions. The man claims to have an interesting role, that of a restorer of lost footage, a reminder of events blotted out by time and circumstance. A moment later, he steps off the bus, the streets alight, and a throng of carnival workers rush the street and break into song. The song could easily be misconstrued as a feel-good, inspirational orchestral prelude, if not for the haunting refrain, “In a world where love’s forgotten, can a memory be born to last?”

The lyric could not be more appropriate for the film’s three principle characters, Sun Na (Zhou Xun), an actress with her sights set on becoming acclaimed on both sides of the Pacific Ocean, Lian Jian Dong (Takeshi Kaneshiro), a pill-popping, emotionally crumbling amnesiac with a deep resentment of his leading lady, an odd occurrence considering he passed on other films to appear in this one with her, and Nie Wen (Jacky Cheung), an ambitious, but somewhat insecure director whose movie has characters that bear a striking resemblance to those in the story that unfolds in flashbacks. For instance, Sun Na refuses to acknowledge her past or allow it to be memorialized in a biography; her character Qiao-Yu is under the spell of a ringmaster and has little memory of her former life. In addition, just as Lian Jian Dong has a past connection to Sun Na, his character, Zhong Yang, has a similar association to Qiao-Yu. And just as the Ringmaster controls the fates of Sun Na and Zhong Yang, Nie Wen has a hand in either the future bliss or impending despondency of his two actors.

As the film progresses, it is apparent that Sun Na and Jian Dong are very far from where they were ten years earlier. Then, there was a sense of innocence about them, as they were both pursuing incredible dreams that were just out of their reach. She wanted to be an actress, he a director. And there was a love between them, a bond formed around their mutual support and encouragement of the other’s dream, a bond that unfortunately was not as mighty as Sun Na’s ambition for fame. That ambition leads Sun Na to make decisions that most would call callous, naïve, and immoral, and yet there she is, ten years later, a star, her dream realized. The only question is why Jian Dong is there with her.

Perhaps Love is a puzzle that gets more interesting and intriguing as its pieces come together. We see the difference between what was and what is, and as the fog surrounding the principle players lifts, complex motivations and insecurities are revealed. However, in the end, despite the impressive fragmented narrative and energetic musical numbers, the film’s central tale is not a new one. Like most film’s that involve love triangles, the picture’s success depends on the appeal of the lead characters, and in this, Perhaps Love does not disappoint. If there is a weakness in Perhaps Love, it is in the musical numbers. They are supposed to be part of a career-making film for Sun Na, who is ever conscious of the impact its success or failure will have on her potential to make a splash in North America. However, it is hard to see how the musical numbers form a film that an audience would pay to see. In particular, the film’s final scene is an odd number involving a trapeze without a safety net under it, an apt metaphor for the situation that Sun Na, Jian Dong, and Nie Wen find themselves in, but hardly a scene that would make sense without the context that the actors playing the roles provide it. On the other hand, what the musical numbers lack in coherence and necessity, they more than make up for in beauty and energy.

As with all movies, the lights must go out eventually, and the actors will move on to other roles. What will they remember of this experience? Will they remember the rekindled emotions that the experience elicited? Will they remember the soul-searching it required that they embark upon? Or will it be lost in the rush to preserve what is comfortable and easy? Yes, the memories were restored, but they can easily be forgotten again. Such is the editing process of a lifetime of recollections. (on DVD)