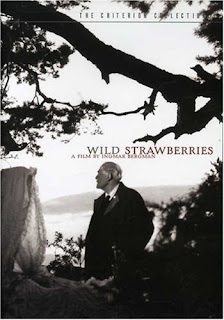 In 2002, Alexander Payne’s film About Schmidt told the story of a man who struggles to find meaning at the end of his life. The job he had for years did not distinguished him, his marriage was not as happy as he thought it was, and he struggles to find activities to occupy his days. In fact, the only impact he appears to have had is on his daughter, and it’s hard to see that impact as positive. Forty-five years earlier, Ingmar Bergman told a similar story in his much heralded film Wild Strawberries. However unlike Payne’s Warren Schmidt, the lead character in Bergman’s film could hardly be said to be invisible to society. Professor Isac Borg (impressively played by Victor Sjöström) is a retired doctor who is both celebrated and loved, so much so that a prestigious university sees fit to give him an honorary degree. The day of the ceremony should be a glorious day for him, the culmination of a life full of distinction, yet the beginning of the film finds Borg explaining his recent decision to withdraw from most of his relations, a move that seems odd coming from a man with as many accolades as Isac Borg. What unfolds throughout the film is the fascinating journey - both physically and psychologically – that preceded Isac’s decision.

On the day before he is to receive his degree, Professor Borg chooses to drive to his son’s house. Accompanying him on this journey is his daughter-in-law Marianne, who calls her father-in-law Uncle Borg, perhaps as a way of making the distance that exists between them apparent to all in earshot of the two of them. To Marianne and Borg’s son Evald, Borg is anything but the life saver that others see him as. To them, he is the cause of their marital woes, having loaned Evald money to go to college and then demanded repayment, not an unreasonable demand, but one that Marianne credits for her husband’s tendency to work excessively, a habit that has increased the distance that exists between them. Marianne even says that Evald hates his father, for while being nice on the ouside, he is hard on the inside, a characterization that doesn’t match what the viewer has seen so far of the professor’s personality.

Much of Wild Strawberries focuses on this apparent contradiction, the esteemed figure of the doctor, a man of medicine, and the figure that inspires resentment and accusations of callousness. Evidence of the latter comes from Marianne, who reminds him of a recent conversation he had with her in which he said things that if true are certainly harsh, and yet we have no reason to doubt Marianne’s version of events. This creates a paradox for viewers. Is the gentle man they see before them a façade, a role played by a man needing to be seen in a positive light? It is a question that Professor Borg himself is wrestling with and which his dreams are increasingly shedding light on. The answers he finds are not the ones he was hoping for.

As the journey progresses, others on their own personal escapades join them. One of them, a young woman named Sara, is torn between the two men that are accompanying her, Anders and Viktor, who each represent a side of human reasoning; mainly, religion and modernity. The five of them also have the unfortunate opportunity to meet a mutually abusive couple, one who belittles the other verbally, the other who attacks her husband physically. It is more than Marianne can bear, perhaps for more than just the shock and discomfort the sight of their verbal barrage is causing Sara, Anders, and Viktor.

With Wild Strawberries, Bergman has presented a picture of a man whose “cruelty” does not come in easily recognizable forms, for Borg’s faults are not temperament or a tendency for violence. It comes from his strict adherence to principle, his avoidance of conflict, his tendency to understand and not point fingers; in short, his desire to be the good guy. This propensity has given him a life without pain, without feelings of anger or hurt. In addition, it has given him, like it has his mother and son, a life of emotional loneliness, for which perhaps there is no cure. (on DVD from Criterion Collection)

*Wild Strawberries is in Swedish with white, English subtitles. The film was ranked the seventh best film of all time by John Koble.
Posted by Azrael Bigler at 9:11 PM