Review – Diary of a Lost Girl 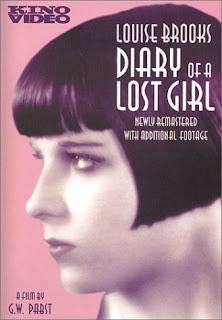 It must be hard when a father’s imperfections are revealed for all to see. It would, of course, be one thing if said imperfections only affected the father, but as with most families, defects trickle down and impact those around him. For Mr. Henning, his weakness is women, and he appears to live by the old adage, love ‘em and leave ‘em. The objects of his desire are his maids. Just how many he has wooed or seduced is not important; what is important is that his dalliances have serious consequences for the ladies involved (his friends simply chuckle and shake their heads). As Diary of a Lost Girl begins, a young woman named Elizabeth is being told that she has to leave; it matters little to Mr. Herring that she is clearly pregnant with his child. In desperation, she holds up a little shirt she has knitted for the unborn child, but even this sight does not melt Mr. Henning’s cold heart.

Diary of a Lost Girl takes place during a time of limited opportunity and great danger for young women. In the film, their future is presented as a four-pronged fork in the road, leading to either the life of a housewife, a job of servitude, a life of vice, or a life of destitution. Rebellion is met with incarceration, and rape is followed by not calls for justice but rather redemption of family honor through marriage – with the perpetrator himself. In this world, a young woman named Thymian (perfectly played by Louise Brooks) is making the transition from young girl to woman, a change that seems to put her at risk immediately. Her first tormentor comes in the form of Meinert, the manager of Thymian’s father’s pharmacy. His eyes enlarge when he sees her and his mouth hangs open. In one scene, his eyes fixate on her chest and then move up to her face, and he grows more excited with each passing inch. One expects him to start salivating at any moment. Thymian cannot understand why Elizabeth has to leave and she is even more shocked by her suicide later that evening; Meinert promises to tell her what he calls “the whole truth.” Instead he rapes Thymian while she is unconscious. While this injustice is being committed, her father is upstairs with the new maid, a woman named Meta, who seems more than willing to have this kind of employer.

Nine months later, after Thymian gives birth to a baby, her family meets to decide what to do about this situation. Apparently, a baby born out of wedlock is a mark of shame, an embarrassment to the family. Maybe that is why instead of summoning the police when they discover the baby’s origin, their first instinct is to suggest Meinert and Thymian marry, an act that would reward the perpetrator and further punish the victim. Thymian’s refusal to go along with that plan, her first act of bravery, will result in her baby being given away and Thymian herself being branded as troubled and sent to a reformatory for wayward girls. It is just the second of an increasing number of obstacles to Thymian’s happiness and safety.

Several scenes stand out in Diary of a Lost Girl. The scenes in the reformatory seem as if they are taking place in a horror or early science fiction film. First, there’s the wife of the Headmaster, a woman who has such a tight regiment that the women incarcerated there all sip their soup at the same time, as if they are part of an assembly line. The Headmaster’s wife also gets great joy from seeing the women sweat and suffer. In one scene, she makes the women exercise to the striking of a gong, and she delights at the frenzy she sees in front of her, as if with each banging of the gong she is mocking them and their plights. Also at the reformatory is her husband, the Headmaster, played by Andrew Engelmann, a man who is a cross between Bull from TV’s Night Court and Apocalypse Now’s Colonel Kurtz. The Headmaster, while moving like a mummy but without the outstretched arms, takes pleasure in grabbing women by the back of the neck and leading them into other rooms. In one scene, he grabs a young woman named Erika, violently wipes lipstick off of her face, and then writes the phrase “punish Erika” in his daily notebook. It is a phrase that makes him smile with sadistic glee. It is no wonder that the women at the reformatory eventually aggressively revolt against them, and the scene in which they do is shocking for the vehemence with which the two are attacked.

Also impressive is the scene in which Thymian is offered new clothes by Erika’s employer, the madame of a brothel. Thymian smiles and is overjoyed, not realizing what she is being drawn into or that many of the people eyeing for a view of the new Thymian are men thinking of how much they want to be the first one’s to remove the clothes she has just taken such joy in putting on. All the while, her supposed savior, the young Count Osdorff looks on, he too cheering on Thymian’s transformation. So much for her knight in shining armor coming to rescue her. Later in a truly heartbreaking scene, the new Thymian will come in contact with the man whose job it was to protect her from all of this, her father. To her horror, seated next to him is Meinert.

Diary of a Lost Girl is not the tale of a woman who fights through adversity to preserve her dignity, for at one point, she accepts the hand that has been dealt her. Rather, it is the tale of a woman whom society has failed – failed to protect, failed to nurture, failed to support, failed to give hope to. Perhaps that is why Diary of a Lost Girl’s final act is a work of sheer genius. Finally given that crucial support she has long been denied, it’s amazing – and a bit empowering - to see what she is able to do. (on DVD from Kino)