Review – Voyage of the Damned 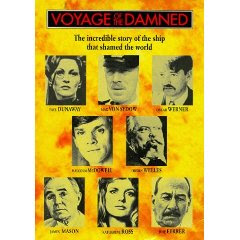 There is no doubt that the offer arose suspicion, and yet there is also no doubt that it was tempting to believe in the opportunity it promised, in the sense of safety and renewal it seemed to dangle in front of them. It was 1939, three years after the night of broken glass and just a short time before World War II would officially erupt, but for Jews living in Germany, the terror had already begun and many could sense that it was about to get worst. Given this context, it is understandable that 937 people would decide to take a chance and trust that - maybe just maybe – the German government would keep their word.

Saturday, May 13, 1939, begins like normal days do. Hundreds of people arrive to embark on a cruise. They check in their luggage, get their passports stamped, and board, many of them decked out in their best formal wear, giving the moment the pomp and circumstance of a night at the opera. However, this is not a normal cruise. Passports are stamped “J” to indicate the religion of the passengers, bags go missing before the ship even leaves the port, and a mother sends her children on the boat without her and without telling them why. “Which truth should I tell them?” their mother wonders aloud. “The truth about why I’m staying or the truth about why they must go?” Moments later, the S.S. St. Louis sets sail for Havana, Cuba, a place where the passengers have been promised refuge from the chaos engulfing their homeland.

The trip offers an escape from the rules and segregation of Germany. Young White Germans meet and have brief encounters with young German Jews. White German waiters serve their Jewish customers politely and respectfully, and doctors who would ordinarily be banned from lifting a finger to treat a Jewish customer tend to them with an amazing degree of attention. Former concentration camp prisoners, originally fearful of expressing their desires and preferences, become comfortable enough with their surroundings to begin to believe that the worst is behind them. However, fear still grips many of the passengers, especially a lawyer named Carl Rosen (Sam Wanamaker) and a doctor named Egon Kresiler (Oskar Werner), the first who suffered terribly under the Gestapo for two years and the other who followed the Hippocratic Oath and treated wounded and sick SS officers. Their fears are in fact justified, for at that very moment, German officers are sowing the seeds of anti-Semitism in Cuba and ensuring that the passengers will never set foot on Cuban soil.

Voyage of the Damned unfolds in a way that does not reveal the motivation of key characters. We see German officers meeting with Cuban officials, but at times, the German officers appear to be arranging for the passengers to be allowed to disembark; at other times, they are clearly satisfied that they will not be permitted to. We know that a member of the crew is working against the passengers, but the captain of the ship, Capt. Schroeder (Max Von Sydow) a man who has refused to join the Nazi Party and is therefore believed to be beyond suspicion, is working equally hard for the passengers. At one point, he even refuses to allow the ship’s crew to visit Cuba, arguing that if the passengers can’t leave the boat, neither can the crew. And what about the visas that the passengers were issued? Aren’t they valid? Apparently, that depends on who is doing the bribing. As a man named Estedas (Orson Welles) explains to a man desperately trying to get his two daughters off the boat, “Your Jews are for sale. Their lives are a matter of negotiation.”

Voyage of the Damned is a tragic and powerful tale that reminds us of a time when nations failed a people in need. It reminds us of the tricks and bluffs that devious governments play in an effort to embarrass nations that verbally attack injustice yet are reticent to put their words into action. The sad thing is that in the case of the 937 passengers on board the S.S. St. Louis, the bluff was not called. According to the film, of the 937 passengers on the St. Louis, only 337 would survive the German concentration camps, an example of what can happen when good people turn a blind eye to injustice. (currently unavailable on DVD)