Review – The Most Distant Course 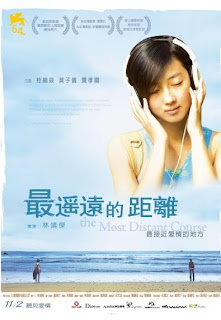 Early in Lin Jing-Jie’s well-acted The Most Distant Course, it is clear that something is not right. Out first example of this is Xiao Tang (Muo Tzu-yi), who, upon awakening one evening, believes he has overslept and is late for work. Like anyone would, he quickly gathers his things and sprints off, hoping his coworkers will forgive his tardiness. The problem is that he no longer works there, having been fired a week earlier. Moments later, we see him sitting alone along the side of a road sobbing profusely. Then there’s Ah Tsai, a man whom we first see frequenting a prostitute. However, before they do anything, Ah Tsai wants to play role reversal. He’ll be the prostitute, and the woman will be a cop that has been mean to her. If that weren’t enough of a signal, we later see him counseling a woman whose relationship has deteriorated. Ah Tsai explains that the woman is emotionally lost, for she both fears that her boyfriend is having an affair and wonders if he could have the same passion for someone else as he had for her. And more to the point, what does it say about their relationship if he can? This all sounds well-intentioned, but the way that Ah Tsai (Jia Xiao-Guo) delivers his diagnosis, loud, fast, and in extremely blunt terms, makes us think there’s something personal behind these words. Last, there’s Wu Ruoyun (Kwai Lun-mei), who is having an affair with her boss, a married man who at one point talks to his wife on the phone and repeatedly tells her he loves her. It’s no wonder she has a bottle of powerful ale lying around her apartment.

One day, Ruoyun begins to notice envelopes addressed to her apartments previous tenant, Ms. Tseng Yazhu, in her mail box. At first, she ignores them, but when they continue to arrive, she becomes curious, and since they arrive without a return address, she decides to open one. Inside is a tape containing sounds of natures marked “Formosa 1.” She begins listening to the tape repeatedly, relishing both the sense of escapism it allows her to feel and possibly the way it allows her to imagine herself somewhere else, somewhere peaceful, somewhere she could be happy. The tapes, it turns out, are being sent by Xiao Tang, who has embarked on a project that he had originally intended to complete with his ex-girlfriend, Tseng Yazhu. Perhaps making the tapes is a form of therapy for him, something done to clear his mind and heart of the woman he can’t seem to let go of. Perhaps this is his way of showing her a reason to come back to him, of showing her how committed he is to the projects they envisioned doing together. Whatever the intended effect, the tapes and the sounds they contain so soothe and intrigue Ruoyun that she leaves work one day and sets off to see the places on the tapes for herself.

The Most Distant Course is the kind of film that sneaks up on you and before you know it, you find yourself involved in and caring for these characters. Personally, I found myself relating to both Xiao Tang and Ah Tsai, as both of their stories have elements that resemble experiences from my own past and, I’m sure, the experiences of many other people. How many people have not wondered whether a former loved one would return to them if they could only see what they are doing now? How many of us after a break-up have not felt the impulse to reach out to someone from our past in the vein effort to either affirm our own worth or make sure that he or she wasn’t our soul mate? How many of us have not wanted to run away, to stand on the edge of the world in the hopes that doing so would bring us clarity and peace of mind? I know I have.

As Xiao Tang, Ah Tsai, and Ruoyun make their way to southern Taiwan, it becomes clear that their journey is also about closure, about finding a way to let go of the pain that each of the situations has caused them. As in real life, this is not always possible, and not all of the characters are able to find the answers they are seeking. In one very powerful scene, Xiao Tang says, “There are many things I understood after we broke up.” I imagine many viewers will share this sentiment, and while we cannot all decide on a whim to suddenly leave on a personal quest, perhaps we would be better off it we could. (on DVD in Region 3)