Review – Leave Her to Heaven 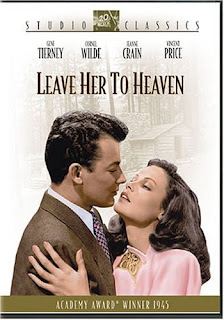 I’m not sure how I would react if Ellen Berent (Gene Tierney) were sitting across from me and staring at me in the same inquisitive manner as she does Richard Harland. I imagine I would react in much the same way that he does initially. Having helped someone he thought was simply an attractive woman to pick up a book she dropped in front of her, he is unnerved when Ellen cannot take her eyes on him. Her gaze however is not that of a woman who has just seen a man she is hopelessly attracted to or suddenly madly in love with. Instead, her gaze resembles one that someone might emit if the person across from them had a strange birthmark or some sort of defect that was both intriguing and peculiar. The oddness of her gaze causes Richard to become slightly undone; he fumbles his cigarette, looks from side to side to avoid locking eyes with her, and folds and unfolds his arms as if no position were comfortable. However, where I might have either switched seats or opened my newspaper to avoid seeing her, Richard engages her in conversation, a conversation that quickly turns into a pick-up attempt on his part, an endeavor I should add that she doesn’t completely fend off. As luck – or perhaps fate would be a better word - would have it, Richard and Ellen are heading to the same location, a coincidence that sets in motion a series of events that I doubt switching seats would have prevented.

Director John M. Stahl’s Leave Her to Heaven follows Richard and Ellen as their relationship grows, due in no small part to Ellen’s sly manipulation. From staying out well into the night to make him worried about her safety to dangling the fact that she’s wearing an engagement ring in front of him only to not wear it later in as equally obvious manner, Ellen shows herself amazingly adroit at encouraging a man’s affection. It is she who eventually brings up the idea of marriage, and when Richard wavers slightly – he has only known her for a short time after all – she silences his hesitancy by kissing him passionately. Soon they are married, and while Ellen says all the right things – she’s doesn’t mind the presence of her husband’s younger brother Danny (Darryl Hickman) and she’s open, even happy, to the suggestion that the family might expand further, her persistent talk of wanting Richard all to herself and of not wanting anyone else to have contact with them makes one reflect upon the eerie gape she gave him on the train earlier in the film and the discomfort he felt upon seeing it. Perhaps his unease and discomfort were more warranted that he knew at that time.

What’s fascinating about Leave Her to Heaven is the way it builds Ellen up as a sympathetic character while simultaneously giving the audience reasons to be extremely anxious about her. One moment she’s smiling and encouraging Danny to walk again; the next moment she’s trying to convince him to move to her mother’s house so that she can have Richard all to herself. One moment she’s reading Richard’s book; the next she’s arguing that he should give up writing completely and simply live off her wealth. As she explains to him, “It’s my dearest wish to support you.” Perhaps the words control and possess would be more appropriate. Mind you she does not desire this out of disrespect or spite, but rather due to a level of affection that most of us cannot comprehend or imagine and which often overwhelms people and begins pushing them ever so closer to abnormal extremes. Ellen’s mother sums it up nicely when she tells Richard, “[Ellen] loves too much.” The consequences of her intense love will alter Richard’s world forever.

Leave Her to Heaven unfolds slowly, allowing viewers to believe it is possible for Richard and Ellen to have a happy life together even in the face of what would be considered less than ideal situations. When that illusion is finally shattered completely, viewers get a chance to witness one of the greatest femme fatales ever. Ellen is cold, calculating, and vengeful, even toward those she should feel affection and warmth toward. She is capable on manipulating people primarily because they do have feelings for her, and this enables her to commit acts that no one can bring themselves to believe her capable of. In the end, no one escapes her wrath, not even her dear adopted sister Ruth (well played by Jeanne Crain), whom she suspects of at the very least having inappropriate feelings for the man she considers hers, Richard Harland.

One of the amazing things about the film is the way it fully develops each of its characters and storylines. The intimacy that grows between Ruth and Richard develops innocently, as relationships occasioned by marriage should. It is as impossible for them to commit acts of impropriety as it is for them to admit the existence of inappropriate romantic feelings. Equally drawn out is Danny’s relationship with Ellen. To him, she is sweet and helpful, a potential mother figure to whom he can turn with life’s everyday problems. The film, however, belongs to Gene Tierney. Playing a character that is both sympathetic and dangerously close to emotional imbalance, she commands the screen. We see her on horseback, sitting upright, exuding the kind of confidence and beauty that would cause a man to overlook any past reservations he may have had about her. Later we see her unnerved by the arrival of her mother and sister. Her change from sweet and loving to nervous and frustrated is instantaneous and powerful. Her performance alone would make Leave It to Heaven worth recommending. The remarkable thing about Stahl’s film though is just how good the rest of it is. Leave Her to Heaven stands as a rare cinematic masterpiece. It is a film that everyone should see. (on DVD)