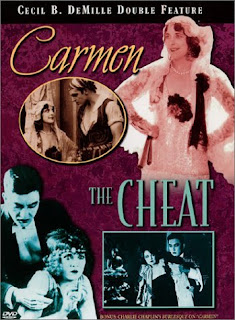 It occurred to me as I was watching Cecil B. De Mille’s 1915 powerful and tragic adaptation of Carmen that some people may hold tightly to righteous standards as a defense mechanism. Perhaps such people are subconsciously aware of the danger they’d pose to others and themselves if they were ever suddenly unable to keep their emotions in check. And such a man is Carmen’s tragic protagonist Don Jose. As Carmen opens, Don Jose (Wallace Reid) is in an enviable position, at least from his perspective. He’s the new officer in charge of preventing smugglers from bringing their goods into a seaside town, and he approaches the job with a remarkable sense of professionalism and moral certainty. Witness the way he doesn’t even bat an eye or consider for a moment the local tavern keeper’s not so subtle references to financial reward coming to those who would simply look the other way as smugglers passed through the town’s gates. Upon seeing Don Jose’s incorruptible nature for himself, the tavern keeper Pastia (Horace B. Carpenter) – who just happens to be in league with the island’s smugglers – instructs the smugglers to head to the mountains and wait for an opportunity to bring the goods in to present itself.

That opportunity comes courtesy of Carmen (Geraldine Farras), a local gypsy who knows the ways of men perhaps a bit too well. Everywhere she goes – no matter whether it’s Pastia’s tavern or outside a local factory – men flock to her, and some of them do not have her best interests in mind. This is a reality that Carmen is well aware of, and she had developed mannerisms to deal with it. One moment she’s attracting men to her and relishing her ability to do so, and the next moment she’s kicking or slapping overzealous men away and proclaiming, “My kisses are not so easily won.” She is fully aware that she is breaking hearts by doing so. It is interesting to note though that this approach is not successful in keeping her away from those who could be seeking a way to satisfy the lust in their hearts, an observation that Carmen herself seems unable or subconsciously unwilling to make. Perhaps it is this conceit, this overconfidence that causes Carmen to offer herself as the solution to the smuggler’s plight. To the joyous band of smugglers and gypsies around her, she announces that everyone can be bought by something and proclaims that she will deliver Don Jose “bound by love.” And with that, she sets off to alter Don Jose’s character just long enough for her friends to bring their illegal products into the city.

One of the impressive aspects of Carmen is how perfectly cast the film is. Wallace Reid is a wonder to behold as a man undone by his own passion. When first approached by Carmen, Reid shows an enormous amount of conflicting emotions. He tries to remain stoic and unaffected, but grins creep in, revealing against his will how surprised and pleased he is to be the object of Carmen’s interest. Even in black-and-white, his red cheeks are clearly visible. This variety of emotion makes his later obsession all the more believable. For her part, Geraldine Ferras exudes great confidence as Carmen. She is a woman in complete control of her life, and she has most certainly decided to make the most of that fact. Her every motion is carefully choreographed, from the swaying of her hips to the lifting of one of her shoulders, and her power to both entice and emotionally undo the men around her is completely believable. Their scenes together have an amazing degree of intensity.

It is safe to say that Carmen is the villain of the first half of the film, as it is her scheme that initiates Don Jose’s fall from grace. However, a case could be made that she is the more sympathetic character in the second half of the film. From the smugglers attempts to not compensate Carmen fairly for her work to the very clear danger that Don Jose’s colleague poses to her physical safety, it is clear that the life Carmen is leading is not one that lends itself to an easy, happy ending. However, I still found myself pulling for her somewhat. Sure it was she who set this series of events in motion, but why shouldn’t she be able to live out her life with her one true love, a toreador named Escamillo, a man who may be just one bull fight away from greatness? Why shouldn’t she be able to lead a life of wealth and prominence? Yet as the town erupts into violence – violence that Carmen in many ways is responsible for – it is also hard not to feel for the fallen man that is Don Jose. As he puts it, “I have paid the full price to make [Carmen] mine.” He is correct in this. His downfall is certainly not what Carmen had intended, and yet it is never a result that she regrets being the catalyst for - at least not until it’s too late. (on DVD from Image-Entertainment)

Labels: 3 and a half stars, Cecil B. De Mille, reviews, Silent Films