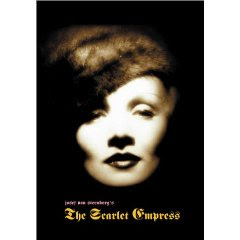 There’s a moment in Josef von Sternberg’s The Scarlet Empress when everything seems possible for Sophia Frederica. Alone in her room, she appears giddy and claps excitedly. When her bedroom door opens, she dances joyfully out the door and speeds her way down the staircase. Once down, she proceeds to kiss every hand that is presented to her. It’s not hard to understand her euphoria. After all, it’s not every day that a young woman receives official notice that she is to become the wife of the heir to the throne of Russia. Now compare this young woman – awestruck by naïve visions of a life of wonder and romance – to the one we see later – hard, calculating, manipulative. By this time the young girl who yearned to be a dancer has long since disappeared. Gone is her belief in fairy tale concepts of romantic princes who fill their princesses’ days with fun and gaiety, In its place stands the knowledge that deception can appear in any form, that princes are not always dashing or stoic, and that love and respect can sometimes be conditional.

The transformation is startling, but fully understandable. Just look at what Sophia endures just to make it safely to her new home: a mother who seems more interested in her place in the world than her daughter’s contentment; the crude advances of Count Alexi, the man in whom her physical care has been entrusted; and the frigid bitter temperatures of a harsh Russian winter. Having survived these hurdles, imagine her surprise at being addressed in the most matter-of-fact manner possible by the woman who hand-picked her to join the Imperial Family, not to mention the public molesting she endures at the hands of the royal physician. Having to then come to grips with the fact that the man she was led to believe was the spitting image of a Roman gladiator is an odd, slow-witted man who plays with toys and smiles while speaking of executions must have completely shattered whatever remnants were left of even her most unimaginative visions of the idyllic life of a princess.

The Scarlet Empress details three parts of Sophia Frederica’s life. The first part I detailed above. In the second part, we see Sophia, now known as Catherine II, attempting to endure her new life. We see her playing childhood games with her attendants and becoming drawn to Count Alexi, only to become so nervous about her own feelings that she has to run away. We see her throw a necklace out a window in anger, only to rush outside to retrieve it a moment later. However, life is not a bed or roses for Catherine, especially with her mother-in-law expecting Catherine and her son to act like “love birds” until a son is born. It is in this stage of her life that Catherine learns the kind of person she has to become in order to survive. By the film’s final act, Catherine has indeed become much more like her mother-in-law than she would ever have thought possible, and while this is a far cry from the person she had wanted to become, it is actually exactly the person that she had to become.

I was particularly impressed by some of the techniques that Sternberg used to shoot the film. In one scene, he pans slowly around a cathedral to show us Catherine and Peter’s wedding ceremony, which is replete with candle-holding guests, operatic singing, and fashionable attire. One is tempted to believe that this is indeed a fairy tale, if not for Sternberg’s close-up of Catherine. I can best describe her expression as a mix of sorrow and reservation. Sternberg intersperses shots of Catherine’s misery with those of Count Alexi, shown brooding in the corner, and Catherine’s soon-to-be husband grinning in such a way that you would think he were the inspiration for the Joker. I also admired the film’s shots of soldiers riding through castles and shadowy figures being ushered into bedrooms from hidden passages, as well as its montages showing the tragic plight of the oppressed. In addition, the cast is simply stellar, especially Sam Jaffe, who played Grand Duke Peter. It would have been easy to overplay him, but Jaffe gives him the right balance of madness, instability, and cunning. Equally impressive were John Lodge (Count Alexi) and Louis Dresser (the Empress). The film, however, belongs to Marlene Dietrich, who gives a performance worthy of multiple awards. Simple put, Dietrich astounds, playing first an inexperienced, young woman, then a woman learning to make her way in the world, and finally a woman ready to seize the world and make it hers.

If there is a fault with the film, it is that it is too short to adequately explain the loyalty that certain officers have for Catherine. While we see Catherine playfully prancing around blindfolded as her attendants and several soldiers follow cheerfully, we do not see her making any sort of connection with them that would explain why they or the local priest would back her militarily. I admit to feeling rather surprised that they would do so, so completely, even going so far as to commit murder. However wanting a film to have been longer is not a sign of a bad film. Rather, it is the sign of a film that intrigues and mystifies, which The Scarlet Empress surely does. (on DVD from Criterion Collection)