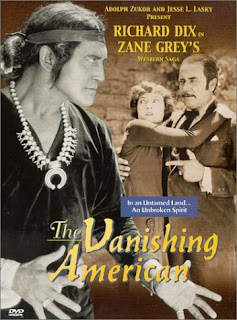 Not being an archeologist myself, I can’t tell you if what we see in the beginning of George B. Seitz’s The Vanishing American has any basis on fact, or if it just what most of those in the know think must have happened. Either way, it is fascinating to see. As the film begins, after we have been reminded on concepts resembling Darwin’s survival of the fittest, we see a caveman step over a ridge. After ensuring that there is no danger, he motions for his wife and child to follow him into the world. However, this is not 10,000 B.C., and a moment later we witness the next stage in evolution, the basket-makers. They, like those that came before them, glance around cautiously, making sure that the land is safe, as they too must make their way into society. This group then gives way to the “slab house people,” who are it appears the first group to not fear their surroundings. They walk straight ahead, unafraid of whatever it is that lies before them. Their successors, the cliff dwellers, demonstrate just how far mankind has advanced in only four stages of human evolution. The cliff dwellers carve enormous cities into walls that are part of what is now known as the Grand Canyon. The problem is that over time they become too complacent, too secure, too slow, and too lazy, foolishly believing that their safety and the preservation of their people are both foregone conclusions. They are not. Soon a “leaner, hungrier” group arrives. Led by Naphaie the Warrior, this new group, later called Indians by Columbus, sweeps through the cliff dwellings and mercilessly attacks its residents in just the first of the film’s many incredibly well-choreographed and impressive battles. When the confrontation ceases, it is clear that the weak have been devoured by the strong.

At this point, it is safe to say that the film has not favored any particular group. After all, one group left itself vulnerable, and the other took advantage of it. The film seems to be suggesting that this is simply a natural process. Perhaps the beginning of the film can even be seen as the start of the Native American’s rise to prominence and power. If so, then October 10, 1540, marks the start of their fall from such a glorious position, for on that day, Don Lopez de Cardenas and twelve of his comrades arrive from Spain as part of Coronado’s expedition. And yet not even this event or Kit Carson’s later acceptance of conflict as the only way to quell a Native American revolt are truly the focus of the film. Rather, these events serve as moments in time that not only sadly but poignantly illustrate the Native American’s loss of their way of life but also after years of broken promises and forced relocations eventually culminate in the Native Americans being force to live, or rather to be imprisoned, on reservations.

It is there, in twentieth century America, that the main story in The Vanishing American takes places. There, another Native American named Naphaie the Warrior (Richard Dix) watches over his people. He is their leader, their voice of reason, and to say they need one is an understatement. Day after day, they are watched over by corrupt or incompetent agents, the most notorious of whom is Booker (Noah Berry). In addition, they have been striped of all customs that they called their own. Their only allies appear to be Marian Warner (Lois Wilson), a teacher at the local school for Native American children, and Bart Wilson (Bert Woodruff), the local government farmer. In fact, Marian and Naphaie are such good friends that he visits her at her home. There, he sits in front of her in private and learns about the Bible. Marian does not afford this privilege to Booker, choosing instead to talk to him in the presence of other women. Her caution is unfortunately all too warranted. Later, we witness Booker enter Marian’s classroom and tries to force his will upon her, an assault that is broken up by Naphaie. However, by doing coming to Marion’s aid, he has make himself the object of Booker and his goons’ wrath, and they mean to have their revenge.

In spite of how this sounds, The Vanishing American is not your average tale of two people overcoming obstacles to their budding romance. To a certain extent, Naphaie is powerful enough to protect Marian, but he is not powerful enough to change the fate of his people, a matter of greater priority than any relationship he might have. His solution, which is in essence his final attempt to win dignity and respect for his people, will surprise you, fill you with pride, and leave you feeling somewhat ashamed. Made years before many Hollywood westerns would portray Native Americans as either warlike, hostile invaders or dumb sidekicks, The Vanishing American is a movie that presents Native Americans as fully realized characters deserving of respect. Richard Dix gives a strong performance as Naphaie, and Lois Wilson matches him, portraying Marian with incredible courage and heart. In addition, Noah Berry is perfectly cast as Booker, a man whose broad smiles cannot hide his contempt for the Native Americans or his lust for women.

The Vanishing American indeed triumphs. It is as a reminder of the intolerance of the past, of the unfortunate fact that throughout history the powerful have often wrecked havoc upon the powerless, a habit that has had tragic consequences for both nations and the people who inhabit them. The Vanishing America remains a potent film. (on DVD from Image-Entertainment)

Labels: 3 and a half stars, George B. Seitz, reviews, Silent Films