Review – Ivan the Terrible Parts I and II 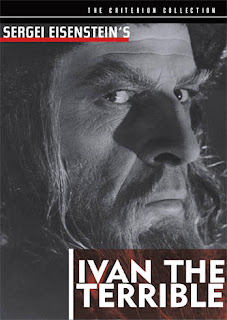 As the first half of Ivan the Terrible ended, Stalin must have been beaming. Here, he must have thought, was a movie that finally restored the good name of Ivan Vasilyevich, the person who united the great Russian Empire, but whom history views as a violent, possible senile tyrant who caused his people nothing but misery. Ivan the Terrible begins with a scroll that presumes to tell its audience how they should view the first tsar – he is a uniter, a man to whom respect and appreciation is owed, a man who appointed himself tsar not for personal gain but to save the country he loved from destruction. We then see Ivan’s coronation, but unlike most inauguration days, those attending the event couldn’t be less happy with what is transpiring. Ivan’s first proclamations as tsar give them reason to be enraged. As tsar, it is Ivan’s goal to end the power of the boyars, form a single Russian state, establish a regular army funded by every Russian not serving in the army including members of the Church, and retake occupied Russian lands. While these proclamations no doubt please the average Russian, they amount to a declaration of war on the politically powerful and the monetarily privileged.

Armed conflict soon becomes a reality, as the Tatars declare war on Russia. Like all great leaders in history, Ivan has to be on the battlefield leading the charge, and he announces his intent go with his troops to fight in Kazar. Average Russians, inspired by Ivan’s vow to help the suffering and the poor, rush to join Ivan in battle. However, the danger to Ivan’s dream comes from not just enemy armies or corrupt officials yearning to keep their ill-gotten gains; it also comes from the king’s inner circle. His most trusted advisor, Prince Andrei Mikhailovich Kurbsky, is torn between his loyalty to the tsar and his feelings of jealousy and unease, feelings that the tsar’s enemies seek to exploit. “You love Anastasia; Ivan got her,” they remind him. “You led the battle; Ivan got the credit.” All Andrei has to do, they explain, is back the tsar’s dim-witted nephew as Ivan’s successor, and when Ivan is gone, Andrei can rule Russia from behind the curtain. It is a tempting proposition, made all the more tempting by the fact that the tsar suddenly returns from battle sick and near death.

In many ways, Ivan the Terrible Part One is the classic story of David versus Goliath. Like David, Ivan (Nikolai Cherkasov) is an underdog, a lone warrior standing up to a bigger, more powerful foe. At no moment is this more apparent than when Ivan, having received the holy sacrament, pleads with his enemies to swear their allegiance to his infant son. His pleas fall on deaf ears, as his enemies either stare at him coldly or turn away in defiance. Ivan will have to cheat death if Russia is ever going to be unified, an act that if accomplished would imply that Ivan is a bit of a god. Yet while the first part of the film highlights the tsar’s amazing accomplishments and righteous intentions, it also does not conceal the tsar’s manipulation of the people. Why else would Ivan abandon Moscow to the boyars unless he wanted ordinary citizens to suffer under them? If the people suffer, he reasons, they will summon him, and if the people summon him, ultimate power is his.

If the first part of Ivan the Terrible makes Ivan out to a hero of the people, the second part, entitled The Boyar’s Plot, shatters that image. Ivan is portrayed as a loner wallowing in self-pity. He has sudden and shocking mood swings. For example, one minute he is acting sympathetic and benevolent, sentiments that appear genuine based on his facial expressions; however, the next moment, he is asking for more people to be executed and smiling at the prospects of further beheadings. In addition, the film’s finale could be seen two ways. While it is true that the film ends after an attempt to assassinate the tsar, it is an attempt that Ivan manipulates for his own purposes, and the victim is clearly not someone who presented much of a threat in the first place. In fact, if the victim is indeed Ivan’s greatest enemy, it is because Ivan made him so.

Sergei Eisenstein’s Ivan the Terrible is a potent look at how power corrupts absolutely, and much of the film works. Eisenstein’s use of light and shadows is fascinating and perfectly distinguishes moments in which Ivan is clearly sane from those in which he is completely mad. If there is a problem with the film, it is in some of the acting techniques employed in the film. Throughout the film, actors occasionally employ movements and facial expressions much more common in silent films than in talking films. This creates unintended moments of awkwardness that can distract from the seriousness of the scenes. However, the film’s political intrigue, its plots and counterplots, and its historic depth more than make up for the peculiar physical movements of some of its actors. Ivan the Terrible is powerful, intriguing, and well worth watching. (on DVD from Criterion Collect)

*Ivan the Terrible is in Russian with English subtitles.

*Ivan the Terrible is occasionally cited as one of the greatest films ever made. It ranked #20 on John Koble’s list of the 100 best films of all time.
Posted by Azrael Bigler at 11:45 PM