Review – Once Upon a Time in America 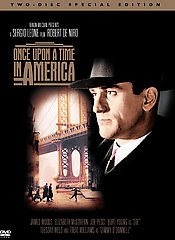 I have a confession to make. This is not my genre. It’s not that I can’t recognize the masterful storytelling techniques or impressive performances that are often found in its films, but rather that I simply don’t care about the characters. While millions of people fiercely debated the fate of Tony Soprano after The Sopranos’ inconclusive finale, I couldn’t muster up the energy to get into the discussion. If he lived, he’ll probably go to jail; if he died, he paid for his crimes. Likewise, I couldn’t see the deaths of some of the show’s other characters as tragic; after all, they were killers, drug peddlers, counterfeiters, extortionists, or enablers, and no amount of details into their private lives changed this in my mind. I mention this because as I watched Sergio Leone’s last film, Once Upon a Time in America, there was only one thing that kept going through my head - who cares?

Once Upon a Time in America is about the friendship between two lifelong criminals, David “Noodles” Aaronson (Robert De Niro) and Maximilian “Max” Bercovicz (James Woods). They meet in their youth, yet what unites them is their interest in not sports or family, but crime. In fact, their first encounter is over a stolen watch that both of them want. At first, they appear to be ready to come to blows, but soon they sense a connection after Max prevents Noodles from being arrested. Together with three others, Dominic (Noah Moazezi), Cockeye (played as an adult by William Forsythe), and Patsy (played as an adult by James Hayden), they set out to make a name for themselves. Their efforts pay off but have tragic consequences for others. As the film begins, Noodles is being pursued by gangsters for ratting out his partners, all of whom lie in body bags on a wet city street. We then see the gangsters murder Noodles’ girlfriend and beat a friend of his to such a bloody pulp that he gives the men Noodles’ location. Of course, their efforts to find Noodles fail, and soon Noodles is at a train station opening a locker that he believes contains a suitcase with a million dollars in it. However, when he opens the suitcase, he finds only a stack of newspapers. His friends dead, his fortune gone, Noodles goes to a ticket counter and buy a one-way ticket out of town. He lets the ticket agent decide his destination.

From there the film journeys thirty five years forward in time. A mysterious letter has brought Noodles back to New York. “They got in touch with me,” Noodles tells his friend Moe Gelly (Larry Rapp). To Noodles, the letter is a warning to get ready. As Noodles and Moe discuss Noodles’ predicament, Noodles’ eyes scan a series of photographs on the wall. One of them is of Moe’s sister Deborah (played as a child by Jennifer Connelly and as an adult by Elizabeth McGovern). Noodles appears affected by this photograph and in almost a whisper says that they should have invested in her. We are then taken back in time to witness not only Noodles’ rise in stature but also his moral decline.

One of the problems with Once Upon a Time in America is that much of Noodle’s embrace of crime occurred prior to the events we see in the movie. In fact, one of the first things we see Noodles and his gang do is set fire to a newsstand while the vendor is still inside. For this, his gang earns either a dollar or the right to “roll a drunk.” Later, we see Noodles try to get his neighbor to sleep with him in a communal bathroom. She’s willing to do it, but it will cost him. In addition, we see Noodles and Max blackmail a police officer by photographing him frequenting a prostitute. To keep the picture out of the public eye, Officer Whitey (Richard Foronjy) pays for both Max’s and Noodles’ trysts with the prostitute. None of these events give us the impression that Noodles is a good person simply held down by negatives circumstances. Instead, he is presented as the one making the decisions, the leader, not the follower. In addition, it is difficult to see Noodles as a troubled romantic. While he seems to have genuine feelings for Deborah, he does nothing to show it. His behavior is aggressive and at times he appears to be stalking her. Rather than being nice to her, he spies on her through a hole above a door. Whereas many men would change their behavior to attain the love of a woman, Noodles chooses his unhealthy friendship with Max over a potential relationship with Deborah, even after they share a tender moment and an even tenderer kiss. In a telling moment, Noodles, beaten and bloody, calls out for Deborah to let him in, to help him in his time of need. She stands next to the door steadfast in her decision not to. That she would later confess to counting down the days he was in jail or still have feeling for him seems odd and out of character.

I’m not suggesting that there’s anything wrong with a character that is essentially unsympathetic. The problem comes when too many characters are. When a character as young as Dominic is gunned down, one would expect to feel at least a tinge of remorse. I didn’t. His death seemed to me a natural consequence of the life he had chosen to lead. I had the same feeling when Noodles goes to jail for avenging Dominic’s death.

Perhaps it is the times in which these characters live that breed this sense of detachment. Once Upon a Time in America takes place at a time of apparent rampant corruption, double dealing, and sexual promiscuity. Women willingly sleep with men for money and food; one even accepts a sexual assault as part of hiding her role in a robbery. Some people may consider these scenes to be instances of unfortunate realism; however, I wonder if they numb us to the real horrors that are occurring in front of us and make otherwise despicable characters out to be simply products of their time.

Towards the end of the film, Noodles makes a decision to do something that will undoubtedly send him back to jail. The woman he is with doesn’t seem to fully comprehend his meaning when he tells her he won’t be home for a while. She says she will wait for him, for she loves it when he wakes her up after he gets home. He looks at her sadly and tells her it will be a lot longer than just a few days before she sees him again. Ordinarily, a scene like this would elicit at least some empathy. However, the scene comes too late and is not supported by any scene that precedes it. Did Noodles just wake up one day and say, “Today is the day I’m going to start being respectful and loving towards women”? His previous actions certainly don’t provide any evidence of this, especially given his treatment of Deborah a few scenes earlier. Some may argue that his actions were a wake up call, a mirror through which he could see the beast that he had become. That’s certainly a possibility; there’s just no direct evidence of it in the film. And then there’s the ending, a switch that was neither surprising nor interesting to me.

Once Upon a Time in America is not a terrible film. It’s just a film that I couldn’t really get into. It is true that the film is well directed, the performances are strong, and the cinematography and sets are impressive, but what is also true is that the film left me with an empty feeling at the end. I hadn’t enjoyed it immensely, yet hadn’t hated it. I didn’t rejoice in the fate of the characters, yet nor did I feel they deserved better than what they got. Only Deborah – and to a slightly lesser extent her brother Moe - remains a completely sympathetic figure, yet the position she finds herself in at the end of the film seemed somehow ludicrous given the things she has said and done previously. At the end of the film, the camera freezes on Noodles’ smiling face. Maybe he is thinking, “I’m finally free.” If this is indeed the case, I have only one thing to say. “I know the feeling.” (on DVD)