Review – Once Upon a Time… When We Were Colored 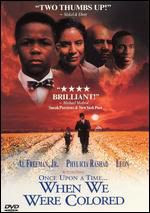 Once Upon a Time…When We Were Colored takes places in a world full of dualities. There are two neighborhoods, two school systems, two drinking fountains, and two bathrooms. This duality applies even to the country itself, with the North symbolizing opportunity and a greater sense of equality for Blacks and the South stigmatized as being forbidding, perilous, and intolerant of them. It is a reality that many adults have long accepted, some whole-heartedly, others reluctantly. Some, it must be said, simply have never stopped to thing about it, accepting their country’s division as a fact of life, as something that has always been and will therefore always be.

The movie opens on a cotton plantation along the Mississippi Delta. There, African-Americans perform the backbreaking task of picking cotton in the scorching heat, as their white supervisor surveys the field but does not lift a finger to help out. At first glance, one might think it was 1850. In truth, the scene we see before us takes place in 1946, yet the only acknowledgement of this is the supervisor’s comment that he’ll dock some of the laborers’ salaries if they don’t get back to work, and that comment carries with it a bitter irony. Sure the days of slavery are over, but much of the South’s financial power continues to rest in the hands of Whites, and much of the physical labor related to agriculture continues to be done by African-Americans.

It is in this world of inequity and rapidly approaching change that a young boy named Cliff is born. In most other films, a story such as his would be one of tragedy and neglect; here, it is one of community, necessity, and determination. Born to a woman who is still very much a child herself, Cliff’s early years are filled with people who should be caring for him electing not to do so. His paternal grandfather denies Cliff is his son Willis’s child, Willis himself runs away to the North in search of a more fulfilling life, and his mother leaves him with her grandparents when she gets married. However, none of these actions are done out of spite or malice; rather, they reflect the difficult economic conditions of the time and the often painful decisions that people sometimes felt compelled to make as a result of those conditions. Later after Cliff’s grandmother’s health deteriorates, he is sent to live with his aunt Ma Ponk (Phylicia Rashad in a very strong performance).

If there was ever a movie that reinforced the notion that it takes a village to raise a child, it is this one. While it is Mary and Willis who bring Cliff into this world, it is his grandfather who teaches him how to face danger and uncertainty stoically. In one scene, a member of the KKK stands in front of Cliff’s grandfather (impressively played by Al Freeman Jr.) and verbally berates him, calling him “boy” and demanding to know what he is looking at. “Poppa,” as Cliff calls him, stands tall, looks into the Clansman’s eyes, and says nothing, demonstrating that sometimes silence is the greatest show of resistance. In addition, it is Ma Ponk who provides Cliff with a permanent mother-figure, someone who nurtures him during tough times and teaches him about responsibility. It is “Uncle” Cleve (Richard Roundtree) who encourages him to use education to go all the way in life and shows him the value of hard work, and it is Sammy (Brandon Crawford) who protects Cliff from bullies and teaches him the important of helping those who are not able to help themselves.

And yet Cliff’s community is not completely self-sufficient, for much of their ability to earn a living is dependent upon the community just outside of their own. That community owns the land on which Cliff and his neighbors work, the houses in which his relatives are employed as maids and gardeners, and the supplies that his neighbors rely on to run their businesses, and as the Civil Rights Movement spreads throughout the rest of the United States, it is not long before issues such as fair pay, equal rights, and economic independence are being debated in Preacher’s Hurn’s church. However, Once Upon a Time…When We Were Colored is not about massive rallies or marches on Washington, as those events seem to be occurring miles away from Cliff and his family. Rather, the film is about the power of the community and what it can accomplish as a community, whether those accomplishments are raising children to be strong, decent adults, providing moral support during tough times, or coming together to collectively take a stand against racial oppression.

Not everything in the film works. The film suffers a bit from a rather mundane narration, in which a character talks about the times in which he grew up in broad generalizations that for the most part do not add anything to the film. Towards the end of the film, the narrator even reminds the audience of the influence that many of the characters had on him, as if he were providing a summary at the end of a narrative essay. The technique is completely unnecessary. I also did not like the way Director Tim Reid occasionally used standard movie conventions in several scenes. For example, in one scene Ma Ponk’s son Melvin (Leon) is at a nightclub. The band suddenly begins to plays a slow, sexy number full of bluesy harmonica wails, and as if on cue, we see the legs of a young woman descending the stairs in slow motion. However, these are minor quibbles about an otherwise fine film.

Once Upon a Time…When We Were Colored is about a time in which injustice was sometimes a fact of life. It is a time that we are in actuality not that far removed from. It is 1951 when Cliff’s grandfather reluctantly teaches Cliff to recognize the letters W and C and to use the restroom and water fountains with a C on them. Seven years later, Cliff is still unable to enter the public library, and minstrel shows are still making their way around the country. However, at the end of the film, Cliff embarks on the next phase of his life full of hope, as if he somehow knows that times are changing and that there will indeed come a time when things are no longer divided by color. (on DVD)

Labels: 3 and a half stars, reviews, Tim Reid