Review – No Regrets for Our Youth 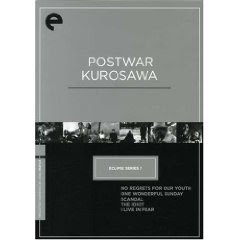 As Ruykichi Noge (Susumu Fujita) and his university classmate Itokawa (Akitake Kono) each reach out to help Yukie Yagihara (Setsuko Hara) cross a moderately shallow river, the difference between them could not be made any more apparent. Itokawa plays it cautious, extending his arm out only part way and making it clear that it is Yukie who must make the final effort to reach his hand. Perhaps he is reticent to make physical contact with her when so many of their friends are nearby; perhaps he sees this as being respectful of Yukie, of following time-honored traditions regarding physical proximity and personal contact. Whatever the reason, we sense right away that Itokawa is a cautious man, one who waits for permission to act, rather than giving in to his impulses. Noge could not be more different. As Yukie awkwardly stands there trying to decide which hand to accept assistance from, it becomes clear that she cannot make a decision, so Noge makes it for her. Forsaking the university uniform and the immaculate condition of his dress shoes, he steps into the water, walks toward Yukie, and before she can say a word to stop him, picks her up and carries her to the bank of the river, in much the same way as a husband would carry his bride into their home on their wedding day. And in that glorious gesture, we know all we need to know about Noge.

Yet it is a dangerous time to be that kind of person, for it is 1933, the year when their beloved school Kyoto University, what they call the “cradle of freedom,” erupts in protest over the growing militarism that is sweeping the country. Those whose teachings and writing are considered to be espousing the wrong ideology soon find themselves expelled. One such professor is Yukie’s father, Professor Yagihara. While he and his colleagues map out a careful, step-by-step approach to achieving his reinstatement, Noge is the only one who sees the situation for what it truly is, the systematic removal of dissenting voices in order to pave the way for all-out war. Therefore, he takes to the streets, seeking to reclaim education from those who would use it as a tool of recruitment and propaganda. It is an effort that is doomed to fail. Soon Noge is arrested, and even Professor Yagihara becomes resigned to his present state. He advocates the students end their strike and return to school. A while later, we see a group of students musically lamenting their lost cause as they stagger home gently after what appears to be a night of heavy drinking. 1933 fades out with the sounds of sorrow; 1938 fades in to the voices of soldiers singing about how glorious it is to fight and die in battle. It is a new day, but not necessarily a better one.

If Noge is the film’s ethical center, then Itokawa is its example of moral weakness. He is the kind of person who seeks to please others even if it means that he embarrasses himself. In one scene, he gets on his hands and knees to beg for Yukie’s forgiveness, not because he has done anything wrong, but rather because Yukie asks him to. Moreover, he can be persuaded to betray his friends and cause his former mentor dishonor, and nonchalantly excuse both actions as him simply following orders. While it’s clear to us, as well as for Yukie, which man is the more honorable one, Yukie’s choice is still a difficult one. Even her father openly hopes that she marry Itokawa, for in Itokawa there is the possibility of a stable, normal life, even if it is one fraught with tediousness.

Kurasawa’s No Regrets for Our Youth is several films simultaneously. It is first the story of a woman who must choose between two men, one offering safety, the other one uncertainty. It is also the story of a country at a time when disagreement was labeled the act of a traitor and when the people who made their voices heard were branded “spies” or “enemies of the state.” Perhaps more importantly, the film is also about Yukie’s maturation and her realization that life is too short to waste time second guessing the decisions she makes. She should live for the moment, no matter how fleeting it may be, and never hesitate for a moment to do the things she knows to be right, no matter what personal toll such actions exact on her. In short, there should be no regrets in her life.

It is remarkable in a way that Kurosawa made No Regrets for Our Youth as soon as he did, for just two years earlier, Kurasawa had made a film called The Most Beautiful, in which the model of a Japanese patriot was a woman who sacrifices herself physically to meet high quotas at an armament factory. That film was designed to rally Japanese workers to work more diligently for the war effort; just two years later however Kurosawa seems to be implying not only that those efforts were futile but also that the entire war was fought under false pretense. The moral hero of No Regrets for Our Youth is not working to arm Japan, but to undermine those determined to plunge it into armed conflict under false pretenses. Exactly how Noge does this is never completely explained. We’re told it has something to do with plotting against Japan on the eve of the bombing of Pearl Harbor, but as Yukie does not ask for details, we do not get any either. And if their time together seems short, it’s because it is. However, it’s not the length of time that matters, but the depth of the relationship. That, and not regretting the decision to have loved and lost so quickly. No Regrets for Our Youth remains a poignant, affective film that dares to say that the freedom we seek must be fought for. For some, this battle is waged in trenches; for others, it is waged in a picket line or in a secret meeting. For Yukie, it is in the arms of the one she loves and in pursuit of a better life for those he left behind. Neither are fights that have any room for regret. (on DVD as part of Eclipse’s Postwar Kurosawa)

*No Regrets for Our Youth is in Japanese with white English subtitles.
Posted by Azrael Bigler at 8:30 AM

Labels: 3 and a half stars, Japan, Kurosawa, reviews, Setsuko Hara