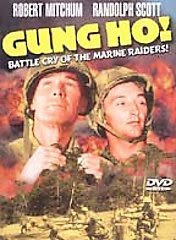 Ray Enright’s 1943 film Gung Ho! is essentially an origin film, and like all origin films, it suffers from a perceived need to explain something either unimportant or widely known. Like the first Matrix film, it spends too much time showing soldiers in training, and like the first Spider-Man film, it devotes far too much screen time to events that are common knowledge. Everyone knows that for a special military unit to take shape, soldiers must interview, train, and then embark on a long journey to make a stand against their enemy. One of the problems with Gung Ho! is that it takes forever for the soldiers to complete this process. The film has a running time of just 88 minutes, and it isn’t until the 56th minute that the fighting actually begins.

That means that the majority of the film is devoted to introducing the soldiers themselves, in an attempt to make their personal sacrifice and commitment more impressive than it already is. So we see individual soldiers volunteering for a secret and rather special battalion, one that will require them to perform “above and beyond the line of duty.” We see Rube Tedrow (Rob Cameron), a young man who wants to join up so that he can prove that he’s better than his neighbor, John Harbison (Alan Curtis), a young man trained to be a priest who wants to minister to troops in the worst of situations, and Frankie Montana (Harold Landon), who wants to prove to himself and everyone else that he is not a nobody. We’re also introduced to two half-brothers, Kurt Richter (Noah Berry Jr.) and Larry O’Ryan (David Bruce), both of whom are in love with Kathleen Corrigan (Grace McDonald) the daughter of a general, and seem to think that joining the Raiders will prove to her father that they are worthy of her hand in marriage. Later in the film, they share one of those altogether ludicrous moments that can only occur on the battlefield in movies. With gunfire blazing all around them, they have a brief discussion over which of them truly loves Kathleen and which of them is truly deserving of a lifetime of happiness with her. I would have thought they’d be more interesting in surviving or completing the mission at this point.

We’re also introduced to a former boxer named ‘Pig-Iron’ Matthews (Robert Mitchum) and another soldier who wants to join the Raiders because, as he puts it, “I just don’t like Japs.” That just this statement would qualify him to be part of the Raiders is laughable, but the film seems to be saying otherwise. The film does introduce a young Filipino character (Alex Havier) who has a more interesting reason for wanting to be part of the Raiders. He wants to join because his family suffered mightily at the hands of the Japanese army in the Philippines. However, this character appears in one scene, is referenced briefly in another, and is then dropped from the story completely. The actor’s name does not even appear in the credits. It seems that the writers felt that proving one’s own self-worth and earning the love of a beautiful woman were more interesting to viewers than avenging past injustices. It’s an odd choice. Because of it, instead of an interesting, powerful story about the atrocities of war, we get scenes of troops cracking jokes, dealing with claustrophobia, singing happy birthday to a fellow Raider, and enjoying an eight-day journey in a submarine, none of which are particularly interesting or dramatic.

Gung Ho! picks up when the Raiders finally reach Makin Island. We see the bravery of the Raiders and the obstacles that they faced during the assault on the island. Even in films, I never cease to be amazed at the courage of the young men and women in the armed forces. However, the movie suffers even during these scenes due to its rather weak dialogue and the tendency to show people making jokes and engaging in soap-opera melodrama; it does not show the true horrors of war. As depicted in Gung Ho! war is bloodless, no soldier dies without first being able to do something heroic, and the enemies are all ruthless, nameless entities, devoid of personalities or individual characteristics. I suspect that the reason we see what we see in the film has to do with the times in which the film was made. It’s doubtful that moviegoers would have gone to see a more reflective, realistic film about a war that was still being fought, much as contemporary audiences stayed away from recent releases such as Lions for Lambs, In the Valley of Elah, and Rendition. However, it is the lack of depth in Gung Ho! that keeps it from ever becoming a truly interesting movie. What we have instead is a version of war that is G-rated and sanitized and a film that in spite of the strong performance of Randolph Scott as the stoic Colonel Thorwald and the film’s dramatic conclusion never entirely obtained my interest. (on DVD; it can also be downloaded legally from www.archive.org.)