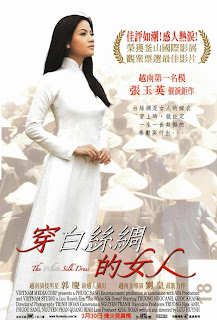 What is it about wealth that makes some of those fortunate enough to have it think they can belittle those that fate has bequeathed must struggle to get it? I don’t have an answer to this of course, but watching the opening scene of Luu Huynh’s well-acted The White Silk Dress, I was struck by how much some people believe that money both empowers them and sets them apart from those without it. In the scene, an affluent woman, enraged by what she perceives as her servant’s negligence, begins physically abusing her servant. Along with the physical abuse comes verbal abuse. The young woman is called a “whore” and accused of daydreaming when she should have been paying attention to her household responsibilities, which is this scene is preparing soup for the wealthy family. “I own you,” she hollers. The remark is both a reminder and a warning.

The young woman is Dau (Truong Ngoc Anh), a powerless servant who when she isn’t preparing meals for her rich employers is made to work the fields and perform menial tasks such as massaging her mistress’s daughter’s feet. The mistress’s daughter is unfortunately the spitting image of her mother, and therefore despite their similar ages and common dreams, would sooner mock and strike Dau than befriend her. Dau’s lone friend in the world is a similarly poor man named Gu (Kranh Quoc Nguyen in his film debut), who because of his physical appearance is called “Hunchback.” Gu is the kind of romantic hero we’re used to seeing in movies, one that is determined, strong, and sensitive. Gu’s employer, the governor of Ha Dong, is not much better than Dau’s, only instead of abusing one servant, the governor has taken advantage of the population of an entire village, a fact that eventually costs him his life. Perhaps the only reason Gu does not share his boss’s fate is that when the Viet Minh revolt reaches the governor’s doorstep, Gu is kneeling on the ground, his hands tied behind him, after having been lashed 100 times for trying to give a starving family a bag of the governor’s rice. In the chaos and violence that ensues, Gu is able to sneak away, find Dau, and convince her to run away with him. They make their way south, hoping that whatever is in store for them is better than the life they are leaving behind. The only thing they appear to take with them is the white silk dress than Gu gave Dau as an engagement present. It is 1954.

We next see them two years later living in a small, flooded hut. They have had a baby girl, but their fortunes have not changed. In good times, they fish for mussels and have enough money to get by. When the floods come, they settle for eating porridge and hope the storms do not last long. It is a hard life. And as their family expands and the sounds of war seem to be getting louder and louder, both civil war and poverty begin to take their toll on what should have been an idyllic life.

If there is a fault to The White Silk Dress, it is that it is unevenly paced. The beginning of the film seems slow and contains too many panoramic shots of Vietnam’s landscape. I suppose this is done to show viewers the beauty of the land that Gu and Dau are leaving behind, but the shots seemed to prevent the film from moving at a decent pace. The middle of the film is well constructed, showing the desperation that poverty can cause and the sacrifices that Dau and Gu make for their children. It is in this part of the film that the significance of the white silk dress is revealed, for having reached sixth grade, two of Dau and Gu’s daughters, An and Corn, can no longer attend school without one. And so Dau sacrifices her most valuable possession so that one of her children can have the future she never had. An and Corn end up sharing the dress in much the same way as the brother and sister in Majid Majidi’s Children of Heaven do a pair of shoes. To me, the last part of the film was predictable and extremely rushed. We’re given ample clues that the war is approaching them, so when tragedy finally strikes, it’s hardly a surprise. Compounding this is the fact that Director Luu decides to add tragedy after tragedy in such rapid succession that the audience has hardly any time to completely grieve the previous one. The film is also hurt by a rather ambiguous ending that may only be understandable when seen as a metaphor. However, I’ve seen the ending twice, and I’m still a bit confused as to what exactly happens.

When The White Silk Dress works, it does so superbly. I found myself caring deeply for this family. Gu struggles mightily to make ends meet, but never gives up despite having very little to show for his efforts. I also enjoyed the way Gu and Dau respond to the fact that An and Corn are now far ahead of them when it comes to education. To these parents, it is a sign that their struggles have finally paid off, and they are not too proud to get a few lessons from their daughters. And then there’s the dress. To me, the dress is a reminder of the presence of classism in society, of the belief that wearing beautiful, expensive things makes one socially acceptable and therefore worthy of receiving an education. However, the film’s closing narrative, as well as many of Dau’s remarks, seems to be arguing that the dress is a symbol of all that is beautiful about Vietnam. Perhaps then it is both.

As I write this review, The White Silk Dress does not appear to be available in the United States or Europe. In fact, other than a few International Film Festivals, it appears that the film has yet to receive a formal theatrical release in the U.S., despite the fact that it was Vietnam’s official selection in the Best Foreign Language category in 2008. It would be a shame if this did not change soon. (on DVD in Region 3)

*The White Silk Dress is in Vietnamese with English subtitles.
Posted by Azrael Bigler at 6:40 AM

can you tell me where in Taipei I might find this DVD? I have been looking a long time for it. Thank you, Tim

It appears to be out of print. I would check places that sell secondhand DVDs.

I have a friend in Taipei that has been looking for it with no luck. strange this is not available on DVD. Thanks again