Miscellaneous Musings: A Strike against Longevity 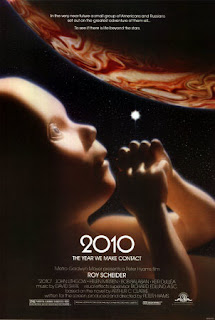 Miscellaneous Musings - A Strike against Longevity

One of my favorite movies growing up was 2010: The Year We Make Contact. I remember watching it with my father in a theatre that – if memory serves correctly – was almost empty. At that time, I had still yet to see Kubrick’s 2001: A Space Odyssey, but luckily, the first two minutes of 2010 adequately summarized all I would need to know about 2001 to understand the events in 2010. I remember being mesmerized by both the science fiction and the political aspects of 2010, and when I finally got a DVD player, 2010 was one of the first films I bought. And yet, I’ve never watched the DVD. Sure, I’ve thought about it from time to time and reflected on how much I enjoyed the film in the theatre, but for some reason those sentiments have not been enough for me to give it another two hours of my life.

I could use the excuse that there were simply too many films that I hadn’t seen for me to be watching one that I had seen. And while there’s some truth to that, it doesn’t explain why I hadn’t hesitated to watch Star Wars: Episode I, Crouching Tiger, Hidden Dragon, Pleasantville, and Better Luck Tomorrow for a second time on DVD. I could say that because I already know how 2010 ends, I find little point in watching it again, but then why have I seen Dead Again, The Lady Vanishes, and 25th Hour more than once? I must therefore come to the conclusion that there is something about the film itself that makes me hesitant to watch it again. And here it is: 2010 simply seems dated.

Think about it. 2010 takes places in a world that simply never existed and likely never will. It takes place in a world in which the United States and the Soviet Union are on the brink of nuclear war, a scenario that in 1984, in a decade in which these two nations built large stocks of nuclear weapons and openly pointed them at each other, seemed realistic and frightening. These days, the notion seems ludicrous, and when radio talk show hosts speak of the danger that Russia poses to the U.S., their comments are more likely to be met with rolling eyes and disbelieving sighs than genuine fear. Therefore, rewatching a film like 2010 poses a challenge for viewers. They have to be able to put themselves back into a mindset that they may simply not recognize anymore, one in which nuclear war is possible and the Soviet Union still exists. It’s not easy. Can one blame someone for simply not watching a film that requires this in the first place? In comparison to 2010, 2001, despite the year indicated in the film’s title, seems timeless, containing nothing that dates it or renders its events implausible. The same cannot be said for films like Red Dawn, Rambo II and III, Crimson Tide, and The Hunt for Red October, all of which depict scenarios that history shows simply never came to be or that are now highly unlikely.

It’s not just history that renders a film irrelevant to future generations of filmgoers. My co-worker and aspiring filmmaker Darryl makes the point – and I’m paraphrasing here - that animated films that rely too heavily on pop culture references are more likely to be forgotten eventually. I recently saw both Wall-E and Ratatouille, and while neither of them were masterpieces, I can certainly see myself one day recommending them or watching them again with any children I might have in the future. They, as well as other animated films like Toy Story, Cinderella, and Monster’s Inc., exists in worlds not bound by time or cultural references. They could have been watched and enjoyed by audiences thirty years ago, and they are likely going to be watched and appreciated by audiences thirty years from now. The same cannot be said for Shrek, no matter how lovable present-day audiences may find its cast of characters. What will audiences in thirty years make of references to The Matrix and professional wrestling? Will they be able to instantly recognize them as contemporary audiences do, or will they shrug their shoulders and wonder what they have just seen? Other movies that may find themselves increasingly ignored for this same reason are films such as Scary Movie, Epic Movie, A Knight’s Tale, and Bee Movie.

Present-day sentiments also play a part in a film being lowered in social value. Despite the fact that it was a common practice at the time, many present-day filmgoers are uneasy watching actors in either blackface or yellowface. This may makes it challenging for films such as The Good Earth, Love is a Many-Splendored Thing, and Breakfast at Tiffany’s to continually be rediscovered by successive generations of filmgoers or hightly praised, which they might have been had the film’s casting choices been different.

I suppose for a film to be truly timeless, it must exist in a time that is easily recognizable as authentic, like the worlds in which Casablanca, Citizen Kane, Paths of Glory, City of God and Modern Times are set, or it must be set in a world not bound by time in any way, just as Star Wars, Sunrise, Metropolis, and The Sixth Sense are. Existing in a world that people recognize but are no longer personally attached to only leaves a film vulnerable to the same neglect that I have given 2010, truly one of my favorite science fiction films but one that I will likely continue to pass on watching again.

As always, I welcome your thoughts on the matter.
Posted by Azrael Bigler at 5:26 AM