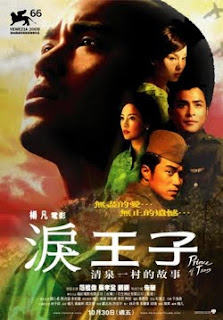 There have been times in history when all it took were a whisper and an unsubstantiated rumor to put the wheels of injustice into motion. And in the 1950s, all it took was one word for otherwise rationale people to suddenly exhibit the most severe symptoms of paranoia - communist. In the United States, Joseph McCarthy led the charge, branding men whose only crime was their supposed adherence to a particular set of beliefs traitors. In Taiwan, the charge carried a much more ominous possibility – some people simply disappeared, never to be heard from again. The period of time in which these atrocities were committed has come to be known as the “white terror.” It is a time that Taiwan is still recovering from.

Prince of Tears is the story of a family living during these troubled times. The government of Taiwan still clings to the idea that they are just biding their time until that triumphant day when they return to the mainland and assume their rightful place in the government. We meet one general who doesn’t even see the need to keep the shrubbery around his house neat, for as he puts it, they’ll only be on the island for another year or so. His wife isn’t sure what to believe, so she hedges her bets. In the film, we get the idea that being a member of the island’s defense was a position of honor. In one scene, we see young children boasting about who is piloting the jet that is flying overhead and just whose father is the better pilot. When the pilots are given leave, their families all go out to meet them, each one beaming with an enormous sense of pride. Later, though we see that being part of the island’s defense is not enough to protect someone from charges of being a sympathizer.

The family at the center of the film is headed by a young pilot named Sun-Han (Joseph Chang) and his wife Ping (Zhu Xuan). As the film begins, we see them in a forest together, Sun-Han playing the accordion, Ping looking around her at the beautiful green trees and smiling sweetly. It’s a perfect moment, and it flawlessly establishes the deep love that exists between them. The rest of their family is comprised of two young girls named Zhou and Li. Their days are happy ones. Zhou is older and more mature, while Li has a charmingly naïve view of the world – one that starts to fade after her favorite teacher mysteriously disappears. Eventually, two trucks full of soldiers arrive for Sun-Han and Ping. Sun-Han is charged with committing acts of treason; Ping is charged with having communist sympathies, a complicated way of saying that she thinks the wrong way. After their arrests, the responsibility of caring for Zhou and Li initially falls on a family friend referred to as Uncle Ding (Fan Chih-wei), a man who may or may not have been responsible for the arrests of Sun-Han and Ping.

Prince of Tears is not as far-reaching as a film like Schindler’s List, for its scope is limited to only those people directly connected to Sun-Han and Ping’s family. To me, this personalized the story very effectively. In one scene, we see the expressions on Zhou and Li’s faces when they see their ransacked house for the first time, and we share their shock. Later we watch as they witness their father being taken out of a truck, lined up with other prisoners and told that he has been found guilty. His sentence is carried out right away, in earshot of his children.

Prince of Tears gets its name from a fairy tale that Li enjoys reading. In the story, a prince breaks down after seeing all of the suffering that the poor are experiencing at a time when the prince and his family live in splendor. I doubt Li hears a political message in the story, yet others do. And if people can be arrested for “trying to fill people’s minds with Communist ideas,” they can certainly be arrested for distributing books or stories that supposedly promote these ideas. Such is the scope of paranoia.

However, Prince of Tears does not completely condemn those that cause hardship to fall on others; instead, it seeks to understand them. In real life, not every one can sit in front of a committee investigating Communist infiltration and proclaim it an injustice to the memories of those who fought and died for their country, which Jim Carrey does in The Majestic. Some people know deep down what the right thing to do is, and yet they still do nothing. They become paralyzed with fear, and some of them, like Ding, have good reason to be. As a member of the government right-wing security bureau, he has seen more than his fair share of “justice” meted out. So is he a coward for not defending Sun-Han? Yes. Does he have a reason to be afraid? Yes, again. Can we blame someone for not doing the right thing when to do so may have meant sharing the same fate as his friend? It’s hard to say. As for his other motives, those just complicate the matter ever more.

Prince of Tears has a somewhat uneven pace, starting off slowly and picking up later as events change the lives of each of the characters. It also has one or two unnecessary plot points that seem to have been added just because they could be, as well as a few loose ends that are not completely tied up. In addition, the ending of the film is likely to cause some initial confusion to audiences not familiar with Taiwanese beliefs regarding ghosts. However, for the most part, the film works well. It presents viewers with a realistic picture of what “white terror” was and just how much damage it brought to one family, especially to two little girls who would never be able to look at the world in the same way again. (in theatres)

*Prince of Tears is in Mandarin with English subtitles. The subtitles contains frequent, but minor grammar mistakes.
*The film is based on a true story.
Posted by Azrael Bigler at 1:34 AM

Labels: 3 and a half stars, reviews, Taiwan