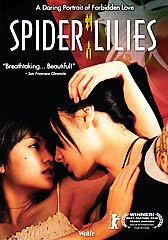 Nine-year-olds do not fall in love. They may develop crushes on teachers or celebrities, but they do not develop the same kind of romantic feelings that we later recognize as love. If we are so fortunate as to bump into the object of our childhood crush, we are more likely to marvel at how much we have matured than we are to experience an instant surge of romantic love. These last three sentences reflect what I believe to be one of the truths about childhood, and it’s unlikely that anything could persuade me to believe differently. So you can imagine how I reacted when a twenty-year-old woman explains to the world that she fell in love for the first time at the age of nine. Even more incredulous is the fact that she seems to have never gotten over the experience. I simply don’t buy it.

And that creates a real problem, for if you don’t accept this premise, then much of Zero Chou’s 2007 film Spider Lilies falls apart. What is meant to be sweet and romantic comes across as peculiar. In addition, behavior that is meant to show the depths of one character’s love for another seems more akin to the actions of a stalker. And when one character agonizes over the other’s seemingly inability to remember the special times they never had, one may be more apt to see the logic in that than yearn for the reciprocation of the love-struck character’s feelings.

Spider Lilies is about two young women who met briefly years earlier and whom chance has seen fit to reunite. Rainie Yang plays Jade, a chipper young woman who seems to always be smiling. I suppose one could say she doesn’t know how unhappy she really is. Jade works (for lack of a better term) at home. Her job entails sitting in front of a computer and saying slightly sexy things in order to get lonely people to pay to see her do a “one-on-one.” The object of her affection is Takeko, played by Isabella Leong, a slightly older woman who makes a living as a tattoo artist. Jade’s employer suggests she get a tattoo because tattoos make a person more desirable, and just like that, the two childhood acquaintances are reunited. There’s only one problem, and it’s a pretty big one – Takeko doesn’t remember Jade. Luckily, there’s a special wig that just might jog her memory.

In another – perhaps better – film, Jade would just have told Takeko her feelings or simply asked her if she remembered her. In Spider Lilies, Jade does it on the internet, making her one of an increasing number of people who feel perfectly comfortable giving complete strangers some of the their most personal details. Most people online do this anonymously, which empowers them to say things in such a way that they would never say if it could be traced back to them, and Jade’s customers are this kind of person. Most of them reduce her childhood awakening into something dirty and immoral. Really, what did she expect? But wait! There’s one sympathetic and understanding person logged in. That must be Takeko, right?

Well, no. That person turns out to a young man named David. David is a police officer gathering evidence on the kind of internet operation that Jade is a part of. Now, if you are sending someone undercover to gather evidence of illicit activity over the internet, what kind of officer would you get for the task? I’d probably get the most suave officer available – you know the one who can go to bars and get five phone numbers in under thirty minutes. However, for some reason, the task of talking to a woman online was given to the shyest person on the force, and being shy, a quality that of course enables him to see Jade’s true potential and inner beauty, David elects not to gather evidence pertaining to Jade’s activities. Instead, he encourages her to quit this job before it’s too late.

There are other characters in the film that also strike the wrong note. There’s A-Dong (Jay Shih), a young man who keeps coming back to Takeko for another tattoo, seemingly because each tattoo makes his feel increasingly powerful. Takeko describes him as a softie, as a young man who wants to be tough but is really just a nice guy inside. The problem is that this description comes after we see him rob three high school boys of their money. The character is also fairly insignificant to the main story, and the film would probably have been better without him. There’s also the slightly odd character of Takeko’s brother Ching (John Shen). This character should have elicited mounds of sympathy from viewers, but instead he comes off as weak and a little undeveloped. He seems to just sit around all day and wait for his sister to come home so that she can tell him some interesting stories. There’s a good reason for this, but knowing it doesn’t make the scenes with him easier to watch.

The events that unfold in Spider Lilies do so in the aftermath of the 7.6 earthquake that struck Taiwan on September 21, 1999. While buildings have been rebuilt and the rubble has been removed, the earthquake and the loss of life it caused have left an emotional scar on the film’s main characters. Takeko and her brother lost their father in the quake, and Jade may or may not have lost her mother. In addition, both Takeko’s choice of careers and her decision to cut herself off emotionally are direct results of the earthquake. I found these elements of the film much more interesting than the romance. Unfortunately, there are not enough of them.

Spider Lilies tries hard to keep viewers interested. It uses brief flashbacks to give the audience information in small pieces and withholds key moments until the film’s final act. The technique is only partially successful. Another problem with the film is that because we know that David is the one talking to Jade, there’s little drama when the secret is finally revealed. Rainie Yang and Isabella Leong do mange to keep the film afloat though their energy and effective performances. However, they deserved a better script.

I haven’t mentioned the significance of the title, yet. It refers to the tattoo on Takeko’s arm. It is said that spider lilies line both sides of the gates of hell. Somehow that makes wearing it as a tattoo unlucky, which makes Takeko’s decision to wear it fairly significant. This is all very interesting. However, if one doesn’t buy the central plot in a film, intriguing subplots are simply not enough. (on DVD)

*Spider Lilies is in Mandarin and Japanese with English subtitles.
Posted by Azrael Bigler at 8:54 AM