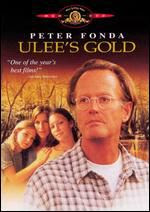 Ulee’s Gold is Peter Fonda’s film. He is in virtually every scene, and in the brief moments when he is not on screen, we see or feel his presence in the actions or reactions of those who are. In the film, Fonda plays a widower named Ulee (short for Ulysses) Jackson. Ulee works as a beekeeper and is raising his two grandchildren alone. It’s not an easy combination, for neither job ever truly ends. Casey (Jessica Biel), his older grandchild, has reached that stage in life when she feels the need to rebel against authority figures. When Ulee tells her to be home by 11:30, she responds, “Just try to make me.” Many teenagers make comments such as this, but when she says it, there’s something extra to it, as if her remarks are overcompensating for an inner angst that is years is the making. Ulee’s other granddaughter is Penny (Vanessa Zima). Unlike Casey, Penny keeps her emotions in check and seems to walk through life curious yet unemotional. At one point, she tells her grandfather that when people are sad inside, it makes them quiet. In a way, Casey and Penny represent the two sides of Ulee’s personality – the calm, unemotional side, which he displays to co-workers and his grandchildren, and the angry, fiery side, which can be brought out by innocuous comments, voices from the past, or the appearance of a distrusted figure.

We get a brief glimpse of Ulee’s emotional side during a brief interaction with the local sheriff, Bill Floyd (J. Kenneth Campbell). Apparently, the two of them had a fall out some time earlier, and Sheriff Floyd wants to reestablish their friendship, a notion that Ulee does not reciprocate. Later, we see Ulee’s emotions turn on a dime when he receives a phone call from his son, Jimmy. Instead of greeting his son with a friendly hello, good afternoon, or how are you, Ulee says something to the effect of, “What do you want, and why the hell are you calling me for it?” His emotions are so strong that his first response upon being told that his drug-addicted daughter-in-law Helen (Christine Dunford) may be in danger is to proclaim how little he cares what happens to her.

Much of the plot of Ulee's Gold revolves around a robbery that Jimmy took part in six years earlier and for which he was put in jail. His two accomplices, Eddie Flowers (Steven Flynn) and Ferris Dooley (Dewey Weber), avoided prison, and are now convinced that Jimmy hid $100,000 before he went to jail, a suspicion that Helen is tricked into confirming. Eddie and Ferris want that money, and they give Ulee one week to get it for them. Such a set-up would normally set in motion a frantic series of events that would occur at breakneck speed - find the money, make sure the family is safe, return the money, survive the experience. However, Ulee’s Gold follows its own path. Before the threat to himself and his family can be dealt with, there’s honey to be made and fences to be mended. Helen must go through detox, the two children must find a way to reconnect with her, and all of them must learn that not everything pertaining to the Jacksons can be handled by the Jacksons alone. Sometimes, they need the help of outsiders. In this instance, they are fortunate to have as their neighbor Connie Hope (Patricia Richardson), who just happens to be a nurse.

Ulee’s Gold takes place in Florida and contains some impressive shots of Florida’s landscape. I especially liked the film’s quieter moments, moments in which Ulee simply goes about the normal business of cultivating honey or moving bees from one location to another. These are actions that he has done many times before and there’s a wonderful sense of calmness and routine to these scenes. Ulee explains that he and the bees have an understanding, and after watching Ulee at work, I’m inclined to agree with him. In one scene, Ulee enlists Penny’s help in moving some of the bees. When they arrive, they see that a bear has “had itself a snack” and that some of the bees have escaped. You might expect someone as young as Penny to be nervous or squeamish in such an environment. However, Penny reacts in much the same way as her grandfather, calm, as if she too has a deal with the bees – or perhaps one with her grandfather. Later, in one of the film’s best moments, she uses what she learned that day to give her mother a rather poignant message.

Ulee’s Gold moves at a deliberately slow pace, which may be awkward for some viewers. However, the pace of the film is determined by Ulee’s personality, and it is in his nature to not act emotionally, to be pragmatic when many others would be frantic, to go it alone when others would seek the help of outsiders. We should not expect Ulee to act the way we would or the way we would like him to. Those expecting Ulee to morph into Clint Eastwood’s character from Gran Torino will be disappointed. Those who admire and understand Ulee will not. There are questions that he asks himself every day that are truly heartbreaking.

Ulee’s Gold contains strong performances all around, and Peter Fonda was nominated for Best Actor for his work. He deserved the nomination. The film was written and directed by Victor Nunez, who has directed just nine films since 1970. His work here is exemplary. In addition to the central plot, Nunez’s script touches on such universal themes as family and generational changes, especially as they relate to Ulee’s profession, and it does so in a way that is insightful and emotional. Ulee’s Gold is not a perfect film. We sense we know where the film is going and ultimately how it will end much earlier than we should, and there are one or two coincidences that seem more convenient than realistic. However, such minor critiques are rather insignificant when one considers the film as a whole. Ulee’s Gold remains a poignant and affective movie. (on DVD)

Labels: 3 and a half stars, Peter Fonda, reviews, Victor Nunez

great review for an exceptional film. thanks.

A new listing of the top 100 films of the 1990s came out by a group called the International Ciniphile Society (http://icsfilm.org/Top90s/ICSTop90s.htm). I'd be interested in what you think of it, Azrael. Didn't see Ulee's Gold on it, did notice Starship Troopers made the list. But aren't these lists made so we can disagree with them?