Review – From Russia With Love 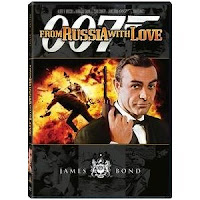 The world that James Bond inhabits in his early films is hardly one that would be considered politically correct nowadays, but that said, it certainly looks like fun. After all, this is a world in which almost every female that comes in contact with Bond, even ones that only see his picture in a file, fall head over heels in love with him. It is a world in which one woman stops revealing vital information about a case to ask Bond (perhaps plead is a better word) if he will make love to her all night, while another woman takes great pains to hear this conversation, perhaps hoping it will get even more intimate or wishing that it were she saying such things to him. It is a world in which two Gypsy women will fight each other mercilessly for the right to marry one of the elders’ sons, yet later seem perfectly content to share Bond, even if it’s just for one day. In Bond’s world, a knife with a lethal, fast-acting poison on its blade can be built into a shoe, assassins delay killing him so that they may fill in any gaps in the plot that he may have, and every gadget he gets before embarking on his assignment will come in handy eventually. In other words, the world that James Bond lives in is a wonder to behold. It’s also one that has not aged well.

From Russia With Love, the second of the James Bond films, depicts a scenario that is so hard to take seriously these days that it has been used as fodder for numerous cinematic comedies, in particular, the Austin Powers films. However, it’s helpful to remind oneself that in 1963 the notion of shadow organizations plotting to rule the world may not have seemed so far-fetched as it does now, as nuclear proliferation was in full force, nuclear war seemed a real possibility, and the world’s two strongest countries so distrusted each other that they did not even have direct lines of communication. Given these circumstances, it is not entirely unrealistic to believe that a shadow group would – if given the chance – play its enemies against each other in order to achieve its goals. That they would refer to each other as “Number 3” and “Number 5” and ask each other such questions as Are you sure this plan is foolproof? is much less so. After all, in a movie, the only reason for villains to go over the details of a plan that is already in motion is for the writers to let an outsider - such as the audience – in on the secret. And that is exactly what should not have been done in From Russia With Love.

From Russia With Love sees Bond (Sean Connery) go from England to Istanbul on a mission of great importance. All he knows for sure is that a young woman named Tatiana (Daniela Bianchi) has requested that he be the one to help her defect from the Soviet Union in exchange for something the British government has been dying to get possession of for some time. This is all Bond knows for sure. The problem is that within the first fifteen minutes of the film, we know far more than Bond does. We know that a mysterious group called SPECTRE is plotting to steal some sort of decoding system that is currently in the hands of the Russians. We also know that they have conceived of a way to pit Great Britain against the Soviet Union, which for reasons unsaid will aid them in their rather dastardly plot, whatever that may be. We know that SPECTRE intends to use Bond to get the device out of Istanbul and then kill him, and we know the identity of the assassin sent to ensure that Bond dies in as much pain as possible. Furthermore, we know that a member of SPECTRE has told Tatiana to cozy up to Bond and feed him false information.

The problem with revealing this many details is that it strips the movie of a great deal of tension. For example, we know who the strange man following Bond is, we know why the woman is pretending to have fallen in love with his picture, and we know that SPECTRE is provoking the growing conflict between Great Britain and the Soviet Union. When the assassin shoots a Russian agent before he can shoot Bond, we don’t wonder why, and when one of the central characters is found dead in an apparent shoot out with a Bulgarian spy who just moments before had appeared to be completely restrained, we don’t wonder if that’s what really happened, for we already know who the real murderer is. In short, there is very little to hold viewers in suspense. The question is then: Is it interesting enough to watch Bond uncover the plot for himself? To me, it wasn’t.

This is not to suggest that the film doesn’t have its moments. I enjoyed the clever banter between Bond and Miss Moneypenny (Lois Maxwell), as well as the brief appearance of M (Bernard Lee). There are also some interesting scenes between Bond and his contact in Istanbul, the wealthy and powerful Kerin Bey (Pedro Armendariz). Their conversations are well written and establish the bond between them effectively. I also liked the look of the area that lies under Kerin’s official residence, for it resembles something out of The Phantom of the Opera yet is modern enough to have a periscope that just happens to look into the Russian consulate. However, too much of the film centers around Bond and Tatiana’s rather poorly-developed relationship, a relationship that I never once believed was genuine. In addition, Bond is rather passive for most of the film. What there is of an investigation is mostly done by other characters, and Bond really doesn’t have much to do in Istanbul except wait for Tatiana to reveal herself and set the plan in motion. To me, this took far too long, and having to hear Tatiana complain about the size of her mouth and Bond then retort, “It’s the right size – for me, that is” made it even longer. (on DVD)