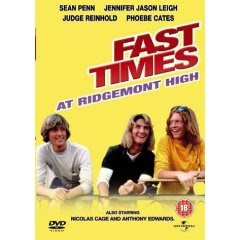 Fast Times at Ridgemont High (U.S., 1982) – If you liked Animal House, you’ll like Fast Times at Ridgemont High. My problem is that I didn’t like Animal House. Written by Cameron Crowe, who later gave us the excellent Almost Famous, Fast Times is about a group of high school students who are more interested in sex and drugs than getting an education. Sean Penn plays the school pothead, Jeff Spicoli, and while he has fun playing the role, the character is given enough screen time to go anywhere interesting. Jennifer Jason Leigh plays Stacy Hamilton, a fifteen-year-old who begins the film thinking she just has to start having sex, only to later learn an important lesson about sex and relationships. One guess what that lesson is. The film’s only saving grace is Ray Walston as Mr. Hand, a teacher who takes his job very seriously. His scenes with Penn’s Spicoli are almost enough to save the film. (on DVD)