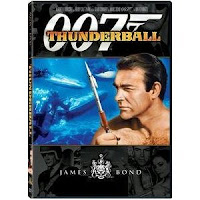 I’m pretty sure that if I had staged my own death, I would quietly slip out of the country and begin leading a completely different life than the one I was running away from. Apparently, members of SPECTRE think differently. Perhaps to them, faking one of their member’s deaths is just a clever way of drawing their greatest enemy out into the open, thereby allowing them to finally avenge the death of their operative Dr. No. If that’s not what going on in the first scene in Thunderball, then I’m completely baffled as to why Colonel Jacques Bouvar (Bob Simmons) would attend his own funeral, especially since doing so requires him to dress up as a grieving widow. I suppose that someone may have simply liked the idea of James Bond doing battle with a man dressed in woman’s clothing. If that’s the case, they should have looked at the clunky way the scene was choreographed and had second thoughts.

In addition to taking part in the ludicrously staged battle with Bouvar, Bond appears a bit off his game in Thunderball, not as a secret agent mind you, but rather as a ladies man. Witness how Patricia Fearing (Molly Peters), an attractive physical therapist, keeps spurning his advances. Clearly, there must be something wrong with her, for in the previous three Bond film, what normal member of the fairer sex was ever able to resist Bond’s charm? Apparently, Pat is different. Watch how she pushes Bond away forcefully after he puts his arms around her and plants a big wet one on her. That should teach him a lesson. So does Bond simply accept her disinterest and move on? Hardly. After a mysterious man, his face completely wrapped in bandages, attempts to off Bond during a rather archaic form of back therapy, Bond, instead of trying to ascertain the identity of the masked man, takes advantage of his nurse’s concern that she’ll be fired as a result of the potentially dangerous “machine malfunction” that occurred during her watch. As events unfolded in front of me, I had to do a double-take - Did Bond really just blackmail that nice woman for sex?

Thunderball is an odd film. On the one hand, we have a rather realistic scenario that continues to worry political leaders around the world – nuclear weapons ending up in the hands of a terrorist group. In the film, the shadow group SPECTRE has successfully stolen two nuclear warheads, and if they’re not found soon, millions of innocent people may die. The world’s only chance of averting a nuclear disaster is of course Bond (Sean Connery), who recognizes one of the men transporting the weapons when they disappeared as being the same person he saw lying dead on a stretcher back at the rehabilitation center in France. Bond soon jets off to investigate the dead man’s sister, the beautiful Domino Derval (Claudia Auger), hoping that she will somehow be able to help him stop the warheads from being detonated. Domino eventually leads Bond to Emilio Largo (Adolfo Celi), SPECTRE’s No. 2. What follows involving these two men and their attempts to outsmart or investiagate the other is actually quite effective.

On the other hand, Thunderball contains enough corny dialogue for three Bond films, as well as a few long slow-moving underwater action scenes replete with way too many characters in identical uniforms. There’s also the unintentionally humorous meeting of SPECTRE operatives towards the beginning of the film, during which a member suspected of embezzling money from SPECTRE is electrocuted in his chair and dropped through a hole in the floor to his final resting place. Apparently, the financial figures he reported from narcotics sales were suspiciously low. Later, an assassin by the name of Fiona Volpe (Luciana Paluzzi) saves Bond’s life because as she explains it, killing him at that time would only send the message the Bond was on the right track. Rather convenient for Bond, wouldn’t you say? Volpe will later laugh at Bond for sleeping with her and not being able to turn her, an apparent reference to his success with Pussy Galore in the far-superior Goldfinger. Bond retorts, “What I did this evening was for Queen and country. You don’t think it gave me any pleasure, do you?” This remark sends Fiona into a rage. Perhaps she actually does care. If this banter isn’t bad enough, Thunderball also contains the following sigh-inducing exchange:

Domino: “You are not like Largo.”
Bond: “Why do you say that?”
Domino: “The way you [pause for dramatic effect] hold me.”

If that exchange made you chuckle, you'll be happy to know that there are plenty more like it to come.

Thunderball has a rather high degree of predictability. A child could predict how each of the gadgets Bond is given during his mission will be used. After all, there are not many purposes for either a homing device or an underwater camera. On the plus side, Largo and Volpe are both effective villains, yet their henchmen leave a lot to be desired. They seem to always be running away at the strangest moments. It’s as if they can’t make a decision on their own and flee whenever something goes wrong. Domino does not have much to do for most of the film, yet she remains a sympathetic character. She’s trapped in a relationship with an obsessed, evil man and may even be indirectly responsible for her brother’s death. As always, Connery is a delight to watch as Bond, matching humor with drama in a way few action stars today can. Unfortunately, the film’s more serious plotlines are weakened somewhat by its campier moments, and I have a suspicion that some viewers will find the film’s underwater climax rather slow. Perhaps to compensate for that, director Terence Young speeds up the action once Bond is safely out of the water and onto Largo’s yacht. Well, I should say that the action outside the boat speeds up, as the boat appears to be going at breakneck speed in all directions. Just how Bond, Largo, and his henchman keep from falling over is anyone’s guess. But then again who goes to a Bond film to see reality anyway? (on DVD)