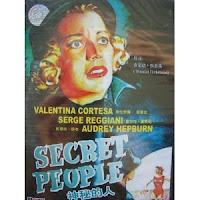 Perception is never universal. Granted, the world would be much simpler if this were not so, but all around one can find evidence to the contrary. There are two perceptions of the Confederate flag, two perceptions of tax cuts – there are even two perceptions of most dictators and tyrants. Clearly, one man’s hero is another man’s villain, and often how one views a person of interest depends greatly on one’s location. These thoughts came to me as I watched Thorold Dickinson’s intriguing 1952 thriller Secret People, for as one of the characters in the film points out, whether his group continue to have the support of the British people all comes down to where they stage their act of defiance. In one location, they are modern-day gladiators standing up against tyranny; in another, they are domestic terrorists.

Secret People takes place in pre-World War II Europe. It begins with the arrival of two sisters, Maria (Valentina Cortese) and Nora Brentana (Audrey Hepburn) in Britain. Their father, a follower of Mahatma Gandhi and a vocal critic of the regime in power in his home country, feels they will be safer in Britain with his trusted friend Anselmo (Charles Goldner). We learn that Maria has a boyfriend named Louis Balan (Serge Reggiani) who has also been sent in hiding so that he can continue the work of the girls’ father. Soon they learn of their father’s murder at the hands of a ruthless general named Galbern (Hugo Schuster in an uncredited performance). The film then jumps ahead seven years. Maria is still working at Anselmo’s restaurant, yet she yearns to honor her father by doing something important, such as becoming a teacher or a writer. As for Nora, she has grown into a very skilled ballerina. Louis, however, has not been heard from in all this time, and General Galbern is still carrying on his campaign of fear back home. The general is also apparently on “good terms” with Britain, for one day Maria happens to see a poster with the general’s picture on it adorning one of London’s streets. The sight nearly brings her to tears.

Anselmo decides to take the girls to Paris for the weekend, for if anything is going to cheer up two sad young ladies, it’s a fun-filled weekend of shopping and sightseeing in grand ole Paris. And then come two events that cannot possibly be a coincidence: General Galbern suddenly arrives to get a personal tour of the British Pavilian in Paris, and in the commotion that his appearance causes, Maria just happens to come face-to-face with her long-lost love, Louis.

Secret People does an excellent job of making Louis both suspicious and likeable at the same time. He clearly still loves Maria. His eyes tell us that. However, he is also distracted by men that dress in black and hide in the shadows, unnoticed by all except Anselmo. In a flashback, we see Louis stab someone and then dispose of his body in a river. What we don’t know is whether this person was working for the general or against him. Later in the film, Louis turns up in Britain and resumes his romance with Maria. Under the guise of a newspaper reporter, he even sets up an audition for Nora. Yet the shadowy figures, now part of a much larger secret organization, continue to appear, and Louis’s actions seem less and less innocuous as events unfold. Soon there are subtle hints of an assassination attempt.

With the exception of a somewhat predictable final act, Secret People is rather well-paced. It’s one of those films that leads viewers to see certain characters one way and then reverses course midway through the film. Some films have trouble doing this, often assigning characters actions that are completely out of character; fortunately, Secret People pulls the switch off rather successfully. When the film’s secrets are finally revealed, they make complete sense. They are also thought-provoking, for viewers are left to wonder whether Louis can truly love Maria while simultaneously putting her and Nora in grave danger.

The film is well directed, allowing Dickinson, the director of the excellent 1940’s film Gaslight, to once again demonstrate what he can do with good material. He also gets great performances from both Cortese and Reggiani. Cortese would go on to appear in numerous Italian films and receive an Oscar nomination for her role in Truffaut’s Day for Night. Reggiani, whose own politically active father fled Italy during Mussolini’s rule, appeared in over eighty films before his death in 2004. The length of their respective careers is easy to understand. Audrey Hepburn’s role in the film is small, and other than a few scenes in which she displays her considerable dance skills, she isn’t given much to do in the film. Her breakthrough performance would come the following year with the release of Roman Holiday. I would be remiss if I didn’t mention one particular moment in the film. There is a scene in which Maria goes in and out of consciousness that is simply a wonder to behold, for during these fade ins and fade outs, neither Maria nor the audience knows what is going on, which is just as it should be in a thriller. (on DVD in Region 2)

Labels: 3 and a half stars, Audrey Hepburn, reviews