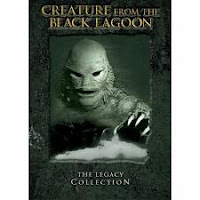 The Creature from the Black Lagoon is said to be Universal’s last great monster, and it may in fact be its most sympathetic. Sure, Frankenstein is looking for a friend, and Dracula is looking for someone to spend eternity with, but the Creature from the Black Lagoon is simply minding his own business when a group of scientists encroach upon his home and begin taking the place apart. It is they that represent an immediate threat to him. Of course, it doesn’t help his case that his first response is to attack those he perceives as invaders, yet as the film goes on, even this act begins to seem like a means of survival, rather than a homicidal tendency, especially after an ichthyologist makes it clear that he wants to kill the creature and bring it back as a sort of scientific souvenir, you know, the kind that ensures fame and fortune for whomever led the effort to retrieve it.

The film follows a traditional pattern for a horror film. There are competing visions of the purpose of science. One scientist, Dr. David Reed (Richard Carlson), sees science as advancing the world’s understanding of nature and life itself; another, Dr. Mark Williams (Richard Denning), sees it in purely monetary terms. And there’s Kay Lawrence (Julie Adams), the woman caught between these two men. Naturally, Kay is the only woman on the expedition, and it will come as a shock to no one that she is the one that the creature eventually takes a shining to. However, the scene in which it takes place, which includes a beautiful ballet-like swim in a clear and exotic lake, is a wonder to behold, and it creates a willingness on the part of viewers to believe that the creature could indeed fall for a woman from another species. In addition, while occasionally feeling forced, the film’s ongoing discussions on science and evolution, in particular its observation that in some cases evolution simply stops, are consistently thought-provoking.