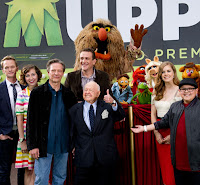 Here is a photo of the cast of The Muppets (2011) gathered together for the red-carpet photo-op at the movie’s premiere in November. The actor with the thumb up and the widest grin is Mickey Rooney, who plays a small town resident in the movie. Why is this astonishing?

For one thing, Rooney’s first movie role was in Not to Be Trusted (1926) and he has contributed his talents to the Hollywood dream machine almost every year since then. For three years (1939-41) he was rated the biggest box-office draw. Rooney achieved Academy Award nominations for Best Actor in Babes in Arms (1939) The Human Comedy (1943) and The Black Stallion (1979). He was nominated for Best Supporting Actor in The Bold and the Brave (1956).

Rooney didn’t win any of those awards, but he was honored with several Emmy and Golden Globe actor’s awards. During his amazingly durable career, Rooney has never had a spell of time when he couldn’t get acting work, when his career was considered finished. And, as you can see in the photo, as of November 2011 he is still happily attending his movie premiers.

One of the open secrets about Mickey Rooney is that he is an engaging actor with a broad emotional range. There are many A-list movies he starred or character-acted in (also see my review here of National Velvet (1944) but for an entertaining, low-budget Rooney movie that shows his acting gifts beautifully, look for Quicksand (1950) in the Film Noir collection at Archive.org, the website for legally public domain movies.

Quicksand opens in a Santa Monica diner where three auto mechanics on a lunch break are soon turning their heads to check out the new cashier, a platinum blonde named Vera played by Jeanne Cagney. The real life sister of tough-guy actor Jimmy Cagney, she serves the movie well as a tough-come-hither femme fatale with the Cagney touch. Dan, the mechanic played by Rooney, wastes no time asking Vera to meet him for a date after her shift. His problem, though, is that it’s Monday and payday isn’t until later in the week. The problem can be solved, or so he thinks, by “borrowing” $20 from the auto shop’s cash register.

The movie proceeds on a singular simple premise that cranks up the story’s tension all along the way to the closing scene. When Dan needs to cover his tracks about the $20, he gets money from a scam involving a hocked watch, and his troubles continue to escalate from there. The fun in watching this movie is following the depths of trouble Dan digs and digs himself into. If you stop to think how realistic the story is, that might spoil your fun because many of the scenarios require a stretch of the imagination.

For his character to be believable, Rooney blends two sets of personality traits into Dan. On the one hand, he is not a bad guy, and when he’s allowed to be himself, he is quite decent. On the other hand, when Dan is under stress or under threat, his moral center evaporates and suddenly he is capable of doing anything no matter how risky or potentially fatal. A tricky role to pull off, Rooney’s naturalness seems authentic.

Peter Lorre is in a few scenes as a pinball arcade owner, but the other co-star worth mentioning is the Santa Monica amusement park pier where much of the action takes place. It is a kind of Coney Island west in its kitschy hay day. Director Irving Pichel also provides fascinating glimpses of the local street and beach town culture (including a cameo by early jazz musician Red Nichols) at mid-century.
Posted by Azrael Bigler at 9:00 AM

Thanks for the review, Paul. It's a fun film, and Rooney plays the central character quite well. Also, was it me, or was Vera always in the same outfit? I wonder if that was meant to cast her as the villain the moment she walks into the diner and to indicate to the audience that nothing about her changes as the film progresses. It also sets up a nice contrast between her and Rooney's ex-girlfriend. One is clearly out for herself, while the other is a young woman trying to help the one she loves. Isn't tnat always the case in a film like this?