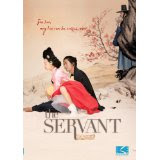 Towards the beginning of Kim Dae-Woo’s The Servant, a renowned writer expresses his excitement at the possibility of writing about a famous man named Bang-ja by referring to him as the town’s “most glamorous gangster.” It’s an interesting choice of words, and we immediately expect a description such as this to have a compelling story behind it. We’re not mistaken. As the film progresses, viewers are transported back in time to see what has earned Bang-ja such a moniker, and the story we see is particularly moving. However, not being able to speak Korean, I cannot verify whether the above quote is the best translation of the writer’s praise. I suspect that it isn’t, for the story that unfolds in front of us is not one in which a character enters the world of organized crime as a lowly servant and then rises in stature. In fact, Bang-ja hardly resembles the kind of gangster one usually sees in films. He is polite and likeable, as well as physically strong and quick thinking, but his low social status renders him completely powerless, and that means that the only things he has at his disposal are his personal connections, and unfortunately, they are not always willing to lend him a hand.

Bang-ja is the servant of Lee Mong-ryong (well-played by Seung-beom Ryu), a slightly socially inept member of the upper class who has the same amount of understanding of women as he has empathy for his servants, which is of course very little. One night, the two of them happen to set eyes upon a beautiful singer named Choon-hyang (Yeo-jeong Jo), and they are immediately enchanted by her. It’s not hard to understand why, for not only does Choon-hyang look stunning in the scene, but she also sings like an angel and moves about in one of the most enticing ways imaginable. Bang-jo is quickly dispatched to give her a message expressing Mong’s interest in her, as well as his desire to meet with her in a more private setting. Eventually the two do meet socially, yet sparks never seem to fly as much as Mong would like them to, a fact that he seems conveniently ignorant of. In his mind, it’s a foregone conclusion that the two of them will be together.

The problem is course is that Bang-jo is a much better match for her, and at each of the meetings between Mong and Choon-hyang, Bang-jo inadvertently proves himself to be the more gallant of the two by defending Choon-hyang against an unruly inn patron, diving in a river to retrieve one of her shoes, and carrying her on his back after she sprains her ankle. Mong doesn’t carry her because he’s playing hard to get, which of course reinforces the notion that he knows little about the opposite sex, for when has a woman ever truly been impressed by a man not helping her? Eventually however, Mong and Choon-hyang do come together. How can this be, you might ask? Let’s just say it is all part of a plan concocted to preserve family honor and marry into wealth. However, one of the most fascinating aspects of the film is Choon-hyang’s apparent willingness to be a participant in the scheme, regardless of her budding feelings for Bang-jo. We don’t see her protesting against the wicked whims of her mother or struggling to free herself from her crushing grip. Instead, Choon-hyang sits around a table and without expressing even a hint at being conflicted discusses the next step in her family’s grand scheme.

The first half of the film suffers slightly as a result of a rather stereotypical subplot involving an older servant named Ma teaching Bang-jo the art of wooing women. The scenes are intended to be cute in much the same way as scenes depicting awkward teenagers seeking the advice of their peers, and while the advice is somewhat better that playing Led Zeppelin to break the ice or characterizing “third base” as “warm apple pie,” it is nevertheless only just above being cringe-worthy. One particularly discomforting scene involves Bang-jo being taught to grab a woman in a way that should cause him to be slapped at the very least. That he isn’t, is hard to explain. The second half of the film however is a revelation. There are hints of revenge, and as the film reaches its dramatic conclusion, there is a real sense of danger. I found myself pulling for Choon-hyang and Bang-jo, even though a part of me sensed that something else was afoot.

The Servant is the second film by director Kim Dae-woo, and it reveals him to be a director and writer of great promise. He gets excellent performances from the cast, and his script successfully draws viewers in and keeps them intrigued. Ju-hyuk Kim is exceptional as Bang-jo, and Yeo-Jeong Jo, in just her fourth film, gives the kind of performance that often makes someone a star. If there is any justice, we’ll be hearing a lot more from her. In addition, the film is shot is some of the most beautiful and colorful settings I’ve seen on the big screen in some time, and its almost Eden-like presentation of nature contrasts noticeably with the rough, dirt-filled streets and plain, undecorated buildings that fill the main town. It’s interesting that neither place is depicted as being completely innocent.

Those who have seen Kwon-taek Im’s excellent 2000 film, Chunhyang, will recognize The Servant for what is it, the retelling of a classic story with a new twist, and perhaps the film works best if viewers have either seen that film or read the story that it is based on. In Im’s film, as in the legend itself, it is Chunhyang that is great romantic character, fighting off suitors and staying true to the one she loves. In this version, that distinction goes to Bang-jo. And yet what I find fascinating is that the events in The Servant create a reason for Chunhyang’s powerful and reaffirming story of love, fidelity, and commitment. After all, which would you rather hear in a packed auditorium: the events in The Servant or those in Chunhyang? For most people, there’s no contest. (on DVD in Region 1 and 3 and on Blu-ray in Region A)

*The Servant is in Korean with English subtitles.
Posted by Azrael Bigler at 9:00 AM