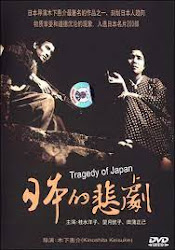 What remains when the bombs stop falling and the dust settles? On a surface level, this question seems easy to answer. We can count buildings and see with our own two eyes the companies still operating, albeit at much less capacity. We can observe the buses and trolleys, the restaurants whose kitchens still churn out delightful meals, and the government buildings still able to dispense aid and operate essential services. Perhaps, a better question, would be what has been lost. To really unravel this, we must look past the rubble and the before-and-after shots of devastated cities. We must even look beyond numbers, past casualty counts, and dollars and cents. Instead, we must put society under a microscope, for it is only when we witness the voids and chasms that now exist that we can truly begin to assess the costs of war on culture and society.

Keisuke Kinoshita’s Tragedy of Japan offers such a view of Japan in 1953. It begins with a startling overview of the country post-World War II – first the war crime trials and scenes of the emperor being greeted by enthusiastic crowds during an ill-conceived tour intended to humanize the former leader, and then, eight years later, protest-filled streets, harsh police tactics, a thriving black market, a dearth of political ingenuity, and a spike in crime and murder. This represents Kinoshita’s view of Japan on a macro-level. To get a personal view, he then zeros in on Haruko (impressively played by Yuko Mochizuku), a single mother supporting two young adults. The son, Seicchi (Masumi Taura), is a university student; the daughter, Utaka (Yoko Katsuragi), is learning sewing and English. The mother works at a hostess at a local inn.

Had there not been a war, their story would likely have gone something like this: The children are raised in a two-parent household; they adore their parents and see them as sources of wisdom; they focus on their studies, believing that better days await those who study hard and play by the rules; marriages - most likely arranged ones - and children follow; and the final shot is one of proud parents, content in the knowledge that their efforts have paid off. The status quo would have remained; their culture reinforced. It is an alternative that the characters in Tragedy of Japan seem acutely aware of; some even speak of it the way one would of the great love that got away, that mythical character whose sudden emergence in your mind often reflects extreme dissatisfaction and an overwhelming sense of regret.

Kinoshita gives us snippets of this view throughout the film. A number of women speak of their husbands as if they were scraps the war forced on them. In their minds, their counterfactual husbands would have been confident, ambitious men capable of really bringing home the bacon instead of emotionally scarred men too timid to reach for the stars. To be fair, the sentiments of their husbands are rather similar, making Japan seem like a country full of mismatched couples intent of making the other aware of their rather massive discontent. And then there are the children. We meet the child of an English teacher to readily admits to being ashamed of her father, a son who values alcohol over a well-fed family, and a young man who attacks a motherly co-worker for having the gull to tell him he was being used by his unscrupulous love interest. If true love is indeed present, it is in hibernation, no match for the lust with which society seems to be chasing its latest paramour, money.

In the beginning of the film, Seiichi returns home with news for his mother. In flashbacks, we see the family struggling in the bombed-out remains of what could be their home, finding food where they can and living day to day. These are actually the good ol’ days – at least they’re together. Back in the present, Saiichi informs his mother that he wishes to be adopted by an older wealthy couple who lost their only son in the war. He knows what this means for his mother; he just doesn’t care. Later, Haruko, alarmed by her son’s request, ask him to take her home, a request Seiichi rejects. As for Utaka, she appears to have developed an interest in her married English teacher, even as her mother pursues an arranged marriage for her, a pursuit that is met with persistent disinterest.

And the reason is horribly simple. War has broken the nation’s collective spirit. What united them, now divides them. Traditionalism is on the out, replaced by a desperate dash for individual destinies that mask a disgust for the past and a severe lack of empathy. Family members take advantage of relatives in need, and moral decisions made in desperation are used against people, even when the alternative was almost certainly starvation and death. There, but for the grace of God, go I has been replaced by If it didn’t happen to me, it didn’t have to happen to you. At one point, Haruko explains, “If a mother knows her children love her, she can go on living.” It is fitting then that Kinoshita ends the film with two characters proclaiming her to have been a good woman, and neither of them is related to her.

Tragedy of Japan is aptly titled, for what Kinoshita shows us is heartbreaking both on the macro and micro level. I admired how he was able to use Haruko’s story as a microcosm for society, and it is clear that he has sympathy for women whose only means of survival was to embrace sin. He saw clearly that what people do on the outside does not always reflect who they are on the inside. Yet he also knew that there are consequences to even the most well-meaning of actions. He saw the chain: War brings about devastation; devastation causes economic ruin; economic ruin begets tough decisions. And tough decisions do not always lead to admiration and understanding. His film is a cry for help. (on DVD in Region 3)

*Tragedy of Japan is in Japanese and English with English subtitles. Alas, the subtitles are haphazardly constructed, with lines of dialogue frequently appearing on screen at the inappropriate time. Sometimes the dialogue disappears before you have had a chance to read it; occasionally it stays on the screen long after it has been said. Suffice to say, this is a film that demands a better release.

*Tragedy of Japan was voted the sixth best film of 1953 by Kinema Junpo Magazine.

Posted by Azrael Bigler at 5:37 AM