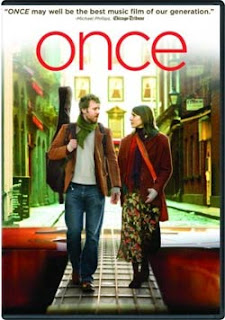 There is a moment in Once that surprises in both its beauty and simplicity. Look closer though and one of life's truths is revealed. In the scene, a young musician is sitting in front of a computer composing a new song. The song begins slowly as the man lets out the phrase, "I think it's time we gave it up." Clearly, this is not a song about the joys that love can bring. "The little cracks they escalated" and "lies, lies, lies": these are the words that the creative process evokes. And yet on his computer are images that give evidence to a contrary emotion. There, the man and a woman smile and laugh, providing proof that once, those words of anguish would have been replaced by gentler ones. Now, even the reminder of past happiness is enough to elicit pain.

Once tells the story of two people, a guy and a girl, who met by chance, and yet this meeting seems almost destined. As she watches they guy perform one evening, the girl, as she is never given a name, seems to recognize something, a kindred spirit perhaps, a fellow prisoner of excuses and poor timing. She notices his passion for music and even perceives lyrics bred from a heart torn and scarred. No one, she explains, could write such lyrics and not still be in love. The girl is also a musician, and a good one at that. However, like the guy, time and circumstance have conspired to prevent her from fulfilling her dream. Shuttling between selling roses on city streets and cleaning people's houses, she has neither the time nor the funds to devote to her art, as piano are too expensive for someone on her budget. To maintain her skill, she practices during lunch at a local shop selling musical instruments.

There, the guy and the girl play together for the first time, he on the guitar, she on the piano. Their collaboration is amazing, especially for two people who have never performed together. As the two of them sang their amazing number, I kept waiting for someone to come to watch them, for a customer to enter and be drawn by the wondrous melody of "Falling Slowly." No one does; in fact, the only response to the song is a slight smile of appreciation from the owner of the shop, one that the guy and the girl do not even see. And yet, the duet lights a spark in them that neither of them expected, yet the fire that is lit is not simply romantic in nature, but it is also rather creative. After that, the guy, who had been a little hesitant at first, can't stop singing in front of her.

In less-capable hands, Once would quickly transform into a romance. The guy and girl would find that they are soul mates and a record contract would follow by the time the credits roll. However, in the hands of Director John Carney, Once avoids anything resembling a cliché. The characters move closer, only to take a step back, like the cautious dance of two people who know the temporary nature of love, romance, and opportunity and are hesitant to get hurt by it. As the film progresses, it becomes clear that their window of opportunity to affect the other is fleeting. To have a chance at success, he cannot stay; to be responsible, she cannot go. Because of that, when they inevitably talk about going to London together, it is bittersweet, for both of them recognize the impracticality and fantastic nature of such an action. Instead, theirs will be a short but important friendship, the kind that you tell your friends and family the story of. The story will likely begin with the words "Once I met a..."

It has been said that Once gets its title from the oft-repeated excuse "I'll do that once I have enough time." To me, though, the title also refers to life's moments that are rarely repeated. It is unlikely that the guy and the girl will ever meet someone who will have quite the same impact on their lives. Sure, other will come follow - bosses, fellow musicians, husbands, wives. None of these meetings, though, will have the importance of that day in the store, the day when two souls that in other life might have been destined for each other came together in perfect harmony, sending each of their lives on a transient journey, during which the impossible was made possible. Those moments happen once, and when they are over, as all moments are, they remain memorialized in some way, in a picture or an image - perhaps even in a song.

Michael Phillips of the Chicago Tribune has said that Once could be "the best music film of our generation." I would go further than that and say that Once speaks to its viewers in a way that a film like Chicago or Sweeney Todd can never do, for in its simplicity, it creates a mirror into which each person can see a portion of themselves, the part of us that always wanted to do or be one particular thing. We see ourselves in the guy and the girl; their songs reveal our emotions, our pain, our optimism. We root for them as their friendship grows, and we are reminded of friendships that we have lost, of people what we met on trains, of people whose words inspired us, of those moments when we believed that anything was possible. A film like this does not come along often. (on DVD)