Review – In a Lonely Place 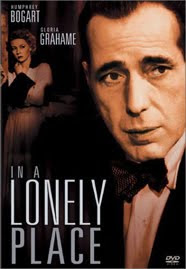 There’s a moment in Nicholas Ray’s masterful film In a Lonely Place when Dixon Steele (Humphrey Bogart) hold his girlfriend, Laurel Grey (Gloria Grahame), in his arms lovingly, looks her in the eyes and tells her that she’ll go when he tells her to go. Ms. Grey doesn’t seem to take the remark seriously and soon she is reciting Shakespeare to him in an effort to help him get some much needed sleep. It’s possible that Dixon intended the remark to be playful, to be a funny line said between two lovers in one of those “let’s not be serious” moments. However, by this time in the film, viewers have already seen Dixon hit a young director for insulting a friend of his, heard a police captain recite a list of his past transgressions – at least the ones that there are reports of – and seen Dixon explain his theory about how a young woman was murdered in such a way that one could easily believe he enjoyed dreaming up scenarios involving murder. What makes this even more chilling is the fact that the murder scenario he is describing is the very one that he is suspected by some of having committed. Perhaps Ms. Grey should have seen Steele’s “innocent” remark as a sign of impending trouble.

And yet it’s hard to completely fault her for believing the oft-repeated notion that love can transform a flawed man into a righteous one. She and Steele barely know each other, after all. Their first actual meeting is at police headquarters, where Ms. Grey corroborates Steele’s assertion that he was in his apartment after midnight on the night of the murder. During questioning, Ms. Grey reveals that she likes Steele’s face. This perks Steele up because he likes every aspect of Ms. Grey. (If you’re wondering how he knows about this, it’s because he is allowed to sit in the back of the room during questioning – my how times have changed.) Later she’ll tell an overeager Steele, “I said I liked it. I didn’t say I wanted to kiss it.” She seems to understand that this will only make a man like Steele pursue her even more. Her later assertion that she needs to be sure before she jumps into a relationship could easily be seen as a calculated move to make Steele feel even more devoted to her when she finally accepts his advances, for what man doesn’t love the feeling that a woman thinks of him as being “the one”?

In most movies, we are led to think of a troubled protagonist as one step away from recovery. Perhaps that step involves listening to a well-meaning coach’s subtle words of encouragement or the protagonist somehow conquering a long-held fear. Here we are led to believe that a relationship can cure Steele of whatever ails him. His manager, Mel Lippman (Art Smith), believes this so much that when he sees Steele sitting at his desk writing, he proclaims it to the result of Ms. Grey enormously positive influence. And as problems develop, they are blamed on the ongoing police investigation, not because of any disconnect existing or developing between them. If that’s true, though, what explains what Steele is rumored to have done to one of his previous girlfriends, Ms. Francis Randall? According to police, Steele left her with a broken jaw, and there was no murder rap hanging over his head at that time.

One the most striking things about In a Lonely Place is just how violent the world it takes place in can be for women. It’s as if the world is filled with grown men who turn to physical violence whenever jealously rears its ugly head. When things begin to go south for Steele and Ms. Grey, her masseuse warns her that it won’t be as easy to get away from Steele as it was from “Mr. Baker.” We don’t learn much else about Mr. Baker, but we understand what is being implied. As for Steele, it’s tempting to see his violent streak as indicating that he is suffering from post-traumatic stress disorder. We do hear that Steele hasn’t written well since coming back from the war, but we also hear that he was aloof and hard to understand even back then.

As I watched In a Lonely Place, I was reminded of something Garance says to Frederick Lemaitre in Marcel Carne’s masterpiece Children of Paradise, that if the two of them were truly happy together, Frederick wouldn’t feel the need to try to make her laugh all the time. I suspect if Steele and Ms. Grey were truly happy or if Steele were completely confident in their relationship, he wouldn’t feel the need to lavish her with gifts all the time. And if Ms. Grey were truly happy with Steele, she wouldn’t feel the need to keep so many things from him. This is not to say that the two of them do not have moments in which they are the picture of bliss, smiling, laughing, unable to take their eyes of the other. It’s just that these scenes do nothing to erase the problems that they will inevitably have to confront. Perhaps then theirs is a love that we should not root for, and contrary to what Ms. Grey would have us believe, twenty-four hours would not likely have altered that.

In a Lonely Place is a truly remarkable film, for it goes against all of the audience’s expectations. The “hero” does not act very heroic, and the damsel in distress should have known better than to get involved with him. In fact, the film makes Hollywood out to be a place where career moves trump common sense or self-preservation, where one can achieve fame but never feel valued as an individual. Bogart is simply amazing as Dixon Steele, showing enough charisma to make us root for him temporarily and then shattering that faith as quickly as he built it up. Grahame is equally good as a woman hoping that this relationship will be different even though she seems to have a habit of choosing the wrong people to date. Andrew Solt’s screenplay wisely focuses on these two characters and only returns to the murder when doing so will add to the insecurity and paranoia that Steele and Ms. Grey increasingly feel. It all leads to an ending that is shocking, powerful, and completely realistic. In a Lonely Place deserves to be considered one of the finest films to come out of Hollywood. (on DVD)