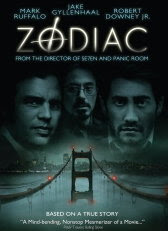 David Fincher’s Zodiac focuses on two aspects of the Zodiac killings that began at the end of the 1960’s. We first see the murders and the investigations that are conducted as a result of them. The investigations are hampered by the fact that the murders occur in different counties and therefore fall under different jurisdictions and by the limited technology that was available at the time. The two lead investigators in San Francisco, David Toschi (Mark Ruffalo) and William Armstrong (Anthony Edwards), try their best to solve the case, but a final verdict proves elusive. The film also shows viewers how the staff of the San Francisco Chronicle reacted as letters from the Zodiac began arriving. In the letters, the Zodiac promised there would be further murders if his letters were not printed in the Chronicle and the two other newspapers that received them. The case quickly becomes an obsession for some, in particular for Robert Graysmith (Jake Gyllenhaal), a cartoonist working for the Chonicle. Zodiac is also about how each of these people responded as the years passed by without their being a resolution in the case.

The film is well acted, and Robert Downey Jr. is fun to watch as Paul Avery, whom Downey plays as a man a little too confident of his own importance. However, the film is about a half an hour too long and has too many characters not to be a bit confusing at times. In addition, certain characters appear to be acting suspiciously at key moments just so audience members can momentarily entertain the notion that each character is the Zodiac. This is particularly true towards the end of the movie. The film also suffers from the fact that it is common knowledge that the Zodiac killings remain unsolved, and therefore, there cannot be a final resolution to the case in the film. I have a feeling that the film would have worked better had it focused more on how these characters handled the unresolved nature of the case and less on the murders themselves. Instead, the film constantly jumps ahead in time to the Zodiac’s next letter, which at one point in the film is a four-year jump in time. The film is so unfocused that at one point Graysmith has to sit down and explain all of the pieces of the puzzle to Toschi. I reminded me of the way characters in comic books sometimes remind readers of events that occurred in previous issues. Characters basically tell people things they already know as a way of getting the reader up to speed. In Zodiac, the moment seems inauthentic, but by that time in the film, it may be hard for viewers to remember all that has transpired, making the conversation somewhat necessary. Personally, I appreciated the refresher, but would rather have not needed it in the first place. (on DVD)